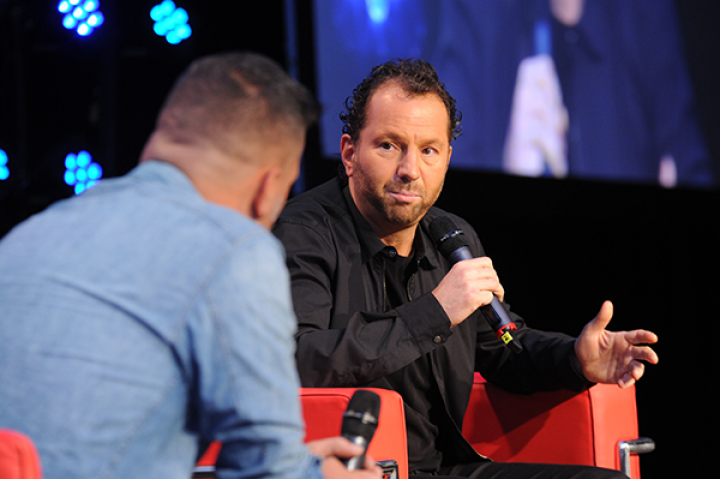 A new Harris Poll of American adults cites the top 5 most important traits in a CEO as trusted, ethical, accountable, competent and respectful.  The same study, which polled more than 23,000 people, indicated that half felt CEOs have a bad reputation. Not Canadian-born Michael Rapino. Those five traits just about sum him up.

The Live Nation Entertainment president and CEO heads a public company with 20,000 employees in 41 different countries, presenting 30,000 live events with an annual revenue of $8 billion (USD).  You would think that staggering number of people to manage would keep him in an ivory tower completely out of touch with the everyday needs and struggles of those who work for him.

“Maybe it’s small-town, Catholic-Italian guilt, but I feel a real moral responsibility that 20,000 employees do well on this ride too,” the Los Angeles-based Rapino said during a recent keynote interview in Toronto for Canadian Music Week.

A vegan, who meditates, and seems to live up to the Canadian “nice guy” stereotype, the 51-year-old executive says he tried not to “go Hollywood" when he moved there.

He was born in Thunder Bay, Ontario, a 14-hour drive from Toronto, where he first began booking bands. After university, he moved to Toronto and worked his way up the corporate ladder from Labatt’s Breweries of Canada for a decade in marketing and entertainment roles to a partner of Core Audience Entertainment, CEO and president of global music for Clear Channel Music Group, Inc. and iHeart Media Inc., and eventually the same role at Live Nation Entertainment, which open its headquarters in L.A. in 2005.

“Along the way in the last few years, if you look at what my mission is at Live Nation, you really want to get close to that service leadership style versus management. I want to make 20,000 employees, when they find out how great we’re doing, then all those offices they actually believe Michael cares about me.”

Because Live Nation is in 40-plus countries, spanning multiple languages and needs, the issue of healthcare varies depending on location.  Universal health care is different in every country, with the single payer (government provides insurance for all residents and citizens) in the majority, and two-tier and insurance mandated in others.

“A few years ago we started doing a lot of surveys and figuring out ‘What is it that we can do for you? And what’s important to you?  Job Security? Healthcare? Ways we can help you.’ I had this one call and we started this one program on that call,” Rapino said.

“I realized I really couldn’t do programs where I could help 20,000 employees, because, listen, a lot of those employees are doing really well. I don’t really need to worry about Riley O’Connor [chairman of Live Nation Canada}. He’s okay. No sick days for him.  He can pay for his own healthcare,” he quipped. "But who isn’t getting taken care of?

"So on this phone call with our employees, I said, ‘We spend a lot of money, we do a lot of things with benefits, the one thing we have to do is make sure we take care of our own and if there’s any employee in this company that’s got a real dire problem, we’re going to take care of them. ‘Email me. Call me.’ We’re going to set up this program.

"So we set this up four years ago. It’s called Taking Care of Our Own. I didn’t know how powerful it was going to be.”

Rapino said he received 400 emails after that initial town hall call and invitation for feedback. “I responded to all of them.”

A few of them made such an impact, their stories actually altered policy at Live Nation.

“’I’m a single mom. I can’t pay the rent by Tuesday and my husband’s beating me and I need to get out of here. I need $5000.’" Rapino recounted by way of example.  "And you shockingly started to realize,  ‘Jesus, we’re out here writing cheques to galas thinking we’re doing a good job, and I’ve got 20,000 of them, times everyone’s married, maybe two kids, I’ve got a charity; it’s called Live Nation. There’s 100,000 of them.”

He said he started getting emails from employees, pointing out the coverage that was missing: from adoption to autism to two weeks off at Christmas.  “Every one of these we started to add,” Rapino said.

What he didn’t mention at his CMW  talk is that any funding requests through the Taking Care of Our Own program are confidential, but there is a crowd-funding platform where Live Nation employees can set up a campaign for themselves or an immediate family member.  Campaigns have ranged from burial costs to home fire loss to a aid to take care of a premie baby to a mother's medical expenses, raising more than $120,000 (USD) to date,  combined.

“We’re deeply committed to supporting each other through hard times and when one of our employees or a member of their family is in any kind of crisis and needs financial assistance, we are committed to matching up to $5,000 f funds raised through this platform,” reads a message on the site from Rapino.

A note explains that if funds have been received from Taking Care of Our Own, they are ineligible for the $5000 match and cannot be on the Live Nation CrowdRise page.

Rapino still holds town halls every three months to see how the company is doing and what it might be missing in terms of meeting the needs of their employees. With 20,000 of them, one can never anticipate; and some, in retrospect, are obvious.

“Perfect example, one of the town halls recently I said, ‘We’re going to give four days, if your kids are sick,” said Rapino. “I got an email after that that said, ‘I don’t have kids, but I have to take care of my mom.’  ‘You know what, you’re right.’ So the next town hall, I said, ‘You get four sick days to take care of somebody important.'

“I think we’ve done about 600 or 700 of those Take Care Of Our Own programs, and that’s probably what I’m most proud about.

“Because, if there’s anything, ultimately, we’re going to get done in Live Nation, other than what we do on a day-to-day basis — taking care of our artists — it’s that we’re truly in the service business. These 20,000 employees are it. And if we can provide some level of support for those that aren’t going to get it from another system, then that’s important to us.”