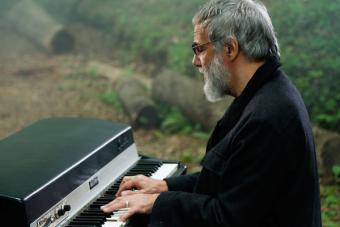 Yusuf Islam, the musician formerly known as Cat Stevens, has released a new song called "He Was Alone" to support refugees. The singer behind classic hits like "Peace Train" says his desire to create the song and its related #YouAreNotAlone charity campaign came after visiting refugee camps in southern Turkey.

"I’ve just returned from a visit to southern Turkey and a camp on the Turkish/Syrian border in Gaziantep," Islam wrote on his site. "People here have lost their homes and are waiting for peace to return, but the children still remain bright and hopeful. The visit was much appreciated and they sang for me. A beautiful human experience.

"Our campaign is called #YouAreNotAlone, inspired by the saying of Pope Francis during his recent visit to a refugee camp in Greece. Funds raised will be channeled through Save The Children for their Child Refugee Crisis Appeal & Penny Appeal UK for their #YouAreNotAlone campaign via our own charity Small Kindness.

"My hope is to open people’s hearts to the sadness experienced by thousands of young souls whose voices are not heard in the clamour created by the politicians and the media in the midst of the refugee crisis, generated by the wars and conflicts blazing through their homelands.”

Small Kindness is a humanitarian relief organization founded by Islam dedicated to alleviating the suffering of families, women, orphans and the elderly. Small Kindness has participated in home building and medical aid projects in Pakistan and more recently initiated new projects in Turkey, the Philippines and Chile, including providing humanitarian aid to Syrian refugees in Turkey and Greece.

The moving video for "He Was Alone" follows the travels of a refugee boy named Walad who spends his time wandering through the wilderness before the uncomfortable conclusion of his journey.

"While the world faces incomprehensible numbers and statistics created by the refugee crisis the tragedy and story of a single soul gets missed," wrote Islam in the video's YouTube description.

"It was difficult to stand by just watching this tragedy without trying to do something. I simply decided to help humanize the narrative and lend my voice to the call for keeping hearts and doors open to every refugee, especially youngsters, who have lost what future they might have once hoped for."

Yusuf / Cat Stevens is playing a special charity concert on June 14 in London, U.K. at the Westminister Central Hall.