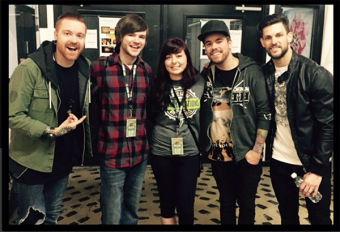 The 13th annual Take Action Tour, headlined by Christian metalcore band Memphis May Fire, has kicked off in the U.S. and hits 19 cities through April 4. Besides raising money for the Living The Dream Foundation to enrich the lives of children and young adults afflicted with life-threatening diseases, some of those kids will actually get to experience their dream day by hanging out with the band.

"It's truly incredible to be able to make dreams come true,” Memphis May Fire frontman Matty Mullins told Samaritanmag in an email. “Working with The LTD Foundation on the Take Action Tour is such a blessing in my life. Using our God given opportunities to inspire fans with terminal illnesses is the greatest thing our band has done yet. I'm just so thankful to be a part of this."

And it has already begun. On Living The Dream Foundation’s Instagram, there is a photo of a young lady with the band from a couple of night’s ago. The text reads: “As we speak our LTDF Guest Taylor is rocking out onstage to her all time Favorite band Memphis May Fire!! Taylor is one of the sweetest girls and attacks everyday with nothing but smiles and a positive attitude. That's a true Rock Star!!!”

Also on the bill are Crown The Empire, Dance Gavin Dance, and Palisades!

The Take Action Tour is one of the initiatives started by Hopeless Records, whose artist roster includes New Found Glory, Taking Back Sunday, The Used, All Time Low and Bayside. The California-based indie label formed a registered non-profit called the Sub City that raises money through charitable albums, tours and events, including the Take Action Tour. “Our mission is to connect bands, fans and the causes they're passionate about!” it says on its web page.

“In 1999 we at Hopeless Records got the crazy idea that if we gave bands and their fans the opportunity to connect their talent and passion with causes that were important to them we could make a positive impact through music. At Sub City, we don't believe many peoples' misconception that our new generation is just lazy and avoiding real life issues such as getting ‘real jobs’; we believe bands and their fans are out changing the world by taking action.

“Our concept to support and spotlight these efforts has already raised more than 2 million dollars and donated to over 50 non-profit organizations. With your continued participation in our various fundraisers, tours, releases and other events we are able to illustrate how we can all make a difference together regardless of age, socio economic status, physical ability or any other factor.”

Living The Dream Foundation is this year’s recipient of monies raised from the Take Action Tour. It was started by Scottie Somers, who has cystic fibrosis, a genetic disorder which mostly affects the lungs and has no cure; it is the leading hereditary killer of children in the world. In his 30s, he was in a band called Lefty, which signed to Interscope and toured for four years with such acts as Foo Fighters and Blink 182.

“He actually played many shows very sick with high fevers, pneumonia, pancreatitis and on IV’s. You would have never known this though, because Scottie can always get out of bed and muster up a smile at any time, regardless of his sickness and pain,” it says in his bio.

“In 2007, after reaching the 40 year old bench mark of life, Scottie deeply felt the need to do something more, something meaningful, a gift back to a life that has been so prolific to himself all these years. Living The Dream Foundation was this answer and gift Scottie yearned to share with all in need.”