You Could Meet Daniel Craig, Win an Aston Martin by Supporting Landmine Removal 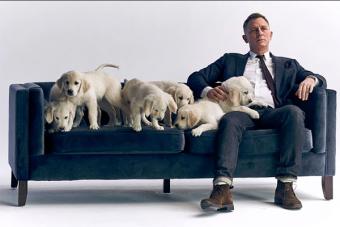 ​People who support the United Nations Mine Action Service (UNMAS) now have the chance to earn a clandestine meeting with James Bond.

More specifically, one contest winner and their guest will win the opportunity to meet actor and current lead of the James Bond franchise, Daniel Craig, in a "super secret undisclosed location."

Would-be spies can win the gathering in exchange for contributing to UNMAS via a campaign currently running on the Omaze charity contest website. UNMAS, established in 1997,  "collaborates with 11 other UN departments, agencies, programmes and funds to ensure an effective, proactive and coordinated response to the problems of landmines and explosive remnants of war, including cluster munitions," it states on its site. "...Every year landmines and other explosive hazards kill or injure thousands of people across the globe."

"To benefit the United Nations Mine Action Service I'm teaming up with Omaze and Aston Martin to invite you to join me for something truly priceless," says Craig in a video to promote the contest, before he tries to quantify its value by saying the grand prize is worth the equivalent of six puppies. Craig can then be seen lounging on a couch with the puppies.

Craig then adds, "The greatest value of this contest is the number of lives we can save by supporting the incredible work of the United Nations Mine Action Service. And that's worth all the puppies in the world."

The way the contest works is that for every $10 donation to UNMAS the donor receives 100 ballot entries to win the Craig ‘n’ car grand prize. Larger donations also yield other prizing opportunities. For example, a $2,500 donation earns 25,000 contest entries as well as an autographed 8x10 of Craig. A $100 donation, meanwhile, is worth 1,000 contest entries and a limited edition t-shirt created by Marek Reichman, the chief creative officer for Aston Martin.

The deadline to make a donation is April 13. The winner will be announced on or around April 27.

Watch Daniel Craig (and some puppies) explain the contest: