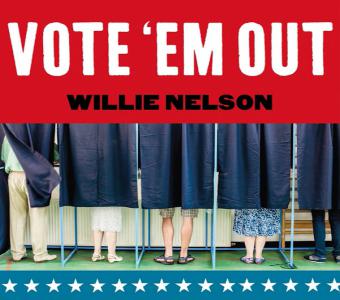 The 85-year-old musician debuted the new song "Vote 'Em Out" on September 29 at the Turn Out For Texas rally in Austin, TX for senate candidate Beto O'Rourke. O'Rourke is a member of the Democratic Party and is running against Republican Ted Cruz in the upcoming U.S. mid-term election happening on Nov. 6.

"This is a new song I want to spring on y'all tonight. Take it home with you, spread it around," said Nelson at the rally, introducing the song.

The song features the opening line "If you don't like who's in there, vote 'em out" as well as "the biggest gun we got is called the ballot box" and "when they're gone we'll sing and dance and shout."

A proud Texan, Nelson is using the new song to bring awareness to RAICES, the Refugee and Immigrant Center for Education and Legal Services. Established in 1986, RAICES is a non-profit agency that provides free and low-cost legal services to immigrant children, families and refugees in Texas.

The upcoming U.S. mid-term election will contest 435 seats in the U.S. House of Representatives as well as at least 33 of the 100 seats in the U.S. Senate. The election figures to be particularly contentious considering the divisive way America has been run since Donald Trump became its president.

This is far from the first time the pot-smoking, karate black belt-owning Nelson has supported progressive causes. He's worked with the Animal Welfare Institute to save horses from slaughter, and other pro-animal groups like Best Friends Animal Society, has created his own brand of bio-fuel, BioWillie and in 2006 he bought and continues to support a church and grocery store in Abbott, Texas to prevent them from failing. In 1985 he teamed up with Neil Young and John Mellencamp to create the Farm Aid concert series.