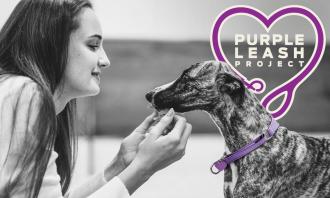 Purple Leash Project was born out of Purina’s mission to bring and keep pets and people together and RedRover’s goal of moving animals and their owners from crisis to care.

Purple Leash Project began nearly seven years ago after the realization that many domestic violence survivors weren’t allowed to take their pets into shelters. Since that time, Purina has helped found the PAWS Act Coalition in support of the Pets and Women Safety (PAWS) Act, which was passed in 2018, and helps domestic abuse victims and their pets by advocating for federal resources dedicated to the cause in the United States.

It’s estimated that one in three women and one in four men experience some form of domestic abuse in their lifetimes, but as few as 10 percent of domestic violence shelters accept pets. In addition, more than 70 per cent of women in shelters have reported their abuser threatened, injured or killed a pet as a means of control.

As a result, nearly half of victims choose to stay in abusive situations rather than leave their pet behind since pets are often like family members that provide unconditional love and support.

It’s estimated that between 10 and 15 percent of domestic violence shelters in the U.S. accept pets. Purple Leash Project’s immediate goal is for that number to reach 25 percent by the end of 2025. There are now pet-friendly shelters in every state but Hawaii and Rhode Island.

The longer-term aim of Purple Leash Project is to fundamentally change the landscape of domestic violence services for survivors with pets.

Through Purple Leash Project, Purina, RedRover and other allies are advocating for change and serving the needs of survivors and their pets by awarding grants to help domestic violence shelters become pet-friendly, engaging volunteers to help with the transformations, and offering support for survivors with pets as new opportunities arise.

The purple leash serves as a visible symbol of an invisible struggle for domestic abuse victims and their pets. Purple represents domestic violence awareness, and the leash symbolizes the unbreakable bond between pets and their owners.

Robinson-Danforth Commission Company began making food for farm animals in 1894. It changed its name to Ralston Purina in 1902 and established the first pet nutrition and care centre in 1926. Ralston sold the Purina Mills animal feed business in 1986 so that Purina could focus on making dog and cat food.

RedRover also empowers educators to help children develop empathy and awareness of animals’ well-being and increase knowledge about the importance of the human-animal bond.