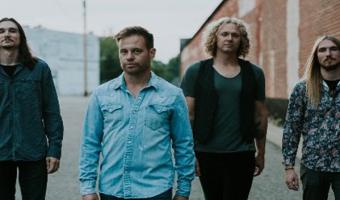 Michigan rock band Wayland want to expand the conversation about mental health and high-profile friends in Shinedown, Three Doors Down and Candlebox are helping them get heard.

The band's just-released single "I'm Not Alright" confronts the stigma of mental health issues head on, telling the listener that not being alright is part of the human condition.

"Life itself is about being not alright," said Phillip Vilenski, Wayland's lead guitar player and founding member, in a statement. "It is not a place of weakness, but actually the place where change and growth is born, where the magic happens. Admitting you are not okay is your place of power and strength."

The band are using the release of the new single to launch the "I'm Not Alright" challenge, which encourages people people to speak up about their mental health issues and to treat them the same way they would physical health issues. In addition to receiving messages of support from the likes of Shinedown, Three Doors Down and Candlebox, rock bands Hinder, Otherwise and Saving Abel have also taken up the I'm Not Alright challenge.

Additionally, the band have teamed with the non-profit mental health advocacy organization LIVIN to support the challenge. Started in Australia in 2013 by Casey Lyons and Sam Webb who created the organization after a friend committed suicide, LIVIN's call to action is "it ain't weak to speak." The organization uses education programs and community initiatives support mental health issues.

Formed in Michigan in 2010, Wayland have toured extensively, releasing two albums and an EP. A number of the band's singles have charted on active rock radio, including “Welcome To My Head," "Reno” and "Get A Little.”