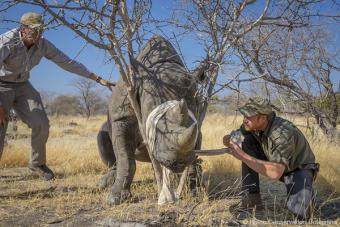 Prince Harry has pledged to protect Africa's rhinoceroses. The younger son of Charles, Prince of Wales; and Diana, Princess of Wales has become a patron of Rhino Conservation Botswana (RCB) and will help raise awareness about the plight of Africa's black and white rhino population in that country.

"This is one of Africa's most iconic species. For me, to see this animal here and be able to help, it's amazing," the Prince said in a video shot on site in Botswana this past September, where he joined Rhino Conservation Botswava to tag and protect rhinos in the Okavango Delta, and watched them keep one rhino cool with water and heart-rate settled.

"This is a black rhino, an animal that deserves the utmost respect. To be able to be sitting next to her is incredibly special," he said at one point, adding that "the black rhino has been reintroduced into Botswana and its numbers are increasing here, while numbers are decreasing elsewhere. If we can’t save these animals, what can we save?"

Rhino Conservation Botswana's mission is to reintroduce and build the wild rhino population in the south-central African country to a population of 5,000 to 10,000 individuals.

Most African rhinos live in the southern half of the African continent. The African Wildlife Foundation estimates the black rhino population has been reduced by 97.6 per cent since 1960 with its numbers estimated at 5,500 and the white rhino at 21,000 throughout the entire continent. The rhino's only natural predator is the humans who target the animals for their horns.

"I’ve been lucky enough to visit Botswana for more than 20 years and am incredibly fortunate to be able to call it my second home," said Prince Harry in a statement. "Being Patron of RCB is an opportunity to give something back to a country that has given so much to me."It’s about time we start celebrating and supporting the countries that are taking the lead in conservation."

At RCB they hope Prince Harry's interest will raise awareness about the dangers African rhinos face.

"Prince Harry has seen at first-hand the cruel and senseless damage inflicted on these endangered animals by poachers. I know that His Royal Highness’s support for our work will make a real difference to rhino conservation," said RCB director Map Ives. "We are hugely grateful for the work and support Prince Harry has already extended to RCB, and look forward to working with him in the future as our patron."