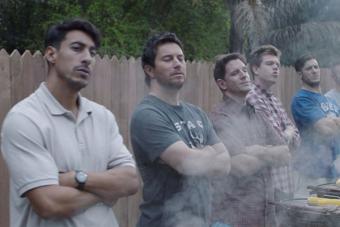 A new ad campaign from Gillette is confronting the concept of toxic masculinity and challenging men to be the best they can be.

Launched on Jan. 13 with a short film titled We Believe: The Best Men Can Be, the safety razor and personal care product company is using the new campaign to show examples of situations where men can take actions to be and do better things.

The one minute and forty-eight second We Believe video starts off by showing a number of sequences featuring things like physical and cyberbullying, catcalling and sexual harassment along with a casual "boys will be boys" disregard for the harm these actions cause. From there it transitions into showing example of men doing good, like when a father breaks up a fight where a boy's being picked on by a group of youths and a man stopping his friend from harassing a woman walking by them.

"Gillette believes in the best in men," said Gary Coombe, president, P&G Global Grooming, in a statement. "By holding each other accountable, eliminating excuses for bad behavior, and supporting a new generation working toward their personal 'best,' we can help create positive change that will matter for years to come."

As part of Gillette's campaign to support men being their best, the company is donating $1 million USD per year ($1.33 million CAD) for the next three years to causes that support three key criteria — respect, accountability and role-modeling.

The first organization that Gillette has announced they'll be working with is the Boys & Girls Clubs Of America. With over 3,400 clubs across America, this organization aims to help young people graduate from school, live healthy lifestyles and give back to their communities. They operate a wide range of programs in areas like sports and recreation, education, character and leadership development, and the arts.

A study commissioned by Gillette found there were four key traits that define a "great man." These were:

Additionally, being a good father, setting a good example for others and taking action when someone is in need were also considered very important attributes for "great men."

The Building A Better Man Project, an organization dedicated to exploring modern masculinity, is partnering with Gillette on this campaign.

"In our last decade of work on the theory of masculinity in modern America, we’ve sought to understand both the internal and external forces that shape men’s attitudes, beliefs and actions,” added Drs. William Seymour, Ramel Smith, and Hector Torres of the Building a Better Man Project. "We’re honored to partner with Gillette as they seek to champion causes that can make a positive impact on men and boys."

Watch Gillette's We Believe: The Best Men Can Be ad