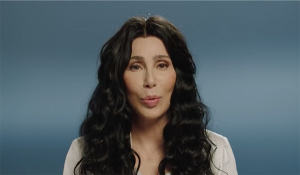 The one minute ad features celebrities one after the other indicating what matters to them as political issues -- including immigration, healthcare, climate change, women’s rights, LGBTQ rights, basic human rights, gun safety and gun reform -- before telling viewers not not lose hope and to “vote. Because It Matters.”

The Foster-directed ad comes as political advertising overall during the 2018 mid-term election is expected to hit a record high of $8.9 million, according to Borrell Associates, with around 20 percent to be spent online.

Also in the “Because it Matters” ad, to run online in competitive races involving Democratic candidates for the House of Representatives, are appearances by Jaina Lee Ortiz, Piper Perabo, Ellen Pompeo, Lily Tomlin and Christy Turlington-Burns.

The political ad aims to capitalize on the record number of women running for public office in the U.S. during the current election season.

That in turn follows the recent battle over the successful Supreme Court nomination of Brett Kavanaugh inflaming the issue of womens' rights as part of the American cultural wars in the Trump era.

"The polls suggest a gender gap in voting larger than anytime since the 1950s... I want to thank Jodie Foster and every woman who participated in this effort for making their voices heard and encouraging others to do the same," Bloomberg said in a statement.

Bloomberg, a former Republican mayor of New York City, recently announced he had registered as a Democrat, leading to speculation he will mount a U.S. presidential run in 2020 under that party's banner.

His Independence USA PAC supports candidates and referendum in local, state and federal races across the U.S., with a focus on gun laws, the environment and education policy.

Foster, a veteran Hollywood actor and director, in her 2016 movie, Money Monster, helmed a drama set against the 2008 financial crisis where a TV personality with insider-trading tips that make him a Wall Street guru is held hostage on air by a man who has lost all of his family's money because of a bad tip.

"Women across the country have concerns and strong points of view and they can make a difference by going to the polls on November 6," Foster said in a statement.

"We hope that this campaign, featuring familiar faces in the entertainment industry, will inspire others to share their views and more importantly take action on Election Day," she added.