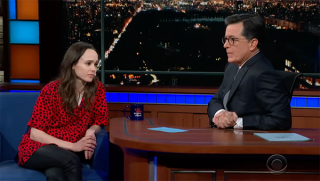 The appearance, which aired last night (Jan. 31), became emotional and impassioned, capable of bringing some viewers to tears, noted in social media comments.

Page appeared on Colbert's talk show initially to promote Netflix's superhero series The Umbrella Academy, in which she co-stars. But it quickly got personal.

"Sorry, I'm like really fired up tonight. But it feels impossible not to feel this way, with the president and the vice-president Mike Pence, who wishes I couldn't be married," Page at one point said as she held up to the TV camera a red carpet photo of herself and her wife, Emma Portner. "Let's be clear. The vice president of America wishes I didn't have the love with my wife. He believes in conversion therapy. He has hurt LGBTQ people so badly as the governor of Indiana," the host of Gaycation on Viceland said of Pence, an openly devout Christian.

She asked her audience to keep Pence's opposition to same-sex marriage in mind as the police investigate an allegedly homophobic and racist attack in Chicago on Jussie Smollett, who is African American and openly gay.

"Connect the dots. This is what happens. If you're in a position of power, and you hate people, and you want to cause suffering to them, you go through the trouble and you spend your career trying to cause suffering, what do you think is going to happen? Kids will be abused and they will kill themselves and people are going to be beaten on the street," Page said, her eyes tearing up as Colbert looked on and the Ed Sullivan Theatre audience applauded.

She then cited her series Gaycation for offering lessons on attitudes to LGBTQ people in the U.S. and elsewhere.

"I have travelled the world and I have met the most marginalized people you can meet, and I am lucky to be able to have this time and the privilege to say this -- this needs to (bleep) stop. " she said, as Page now bowed her head before bringing it up to acknowledge the sustained applause from the audience.

"I do want to add... I do want to add...," Colbert then began to say, as he waited for the audience applause to die down, "I want to say that the new Netflix series The Umbrella Academy is about a family of superheros," he added with perfect comic timing.

"It's a great show!" Page then shouted out as she remembered her talk show appearance had been meant to plug the Netflix series.

Earlier, Page had also talked about the current #MeToo movement after Colbert asked whether Hollywood had changed as a result.

"Hollywood, and the film industry in particular, is so binary and can be so narrow in who can tell stories and who can be in stories. And I hope it continues to change. Like I say, clearly there's changes. And there's people who are leading the way, But I hope it continues to go more quickly, because there's certain things I'm just sick and tired of," Page said.

At that point, Colbert, sensing raw emotion had welled up in Page, gently asked what had caused her frustration.

"I've worked in this industry for a while. I grew up in Canada, and started working at 10 and there was the Hard Candy/Juno times, my late teens and early 20s, and in terms of the misogyny and homophobia I've dealt with, it's been really unfortunate," she answered.

What would she tell her younger self as an actress now that she was older and the Time's Up era was at hand, Colbert then asked.

"I'd give her a hug," Page answered, before adding "and I'd tell her she's not alone and she can reach out to people and that behaviour is not okay.'

Colbert said younger actresses may not want to “ruffle feathers” as they come up the ranks in Hollywood, even as progress is made on gender issues. “Sure it is (difficult), and it was very hard for me," she said. "I dealt with a lot of stuff that was totally normalized, since the age of being really young.”

Colbert then turned the conversation to climate change, another social cause for Page, and for which the talk show host said it was a difficult issue because it's impact on the Earth and its environment seemed as if it was down the road.

Here Page's impatience for change came through, yet again. "This is something that’s happening, it's really happening. I know, I hear you.Of course we wish, but it is happening now. The most marginalized people in the world, who have nothing to do with this, are the ones who are suffering the most currently, including in Canada, including the environmental racism that's happening in Canada, and in the province I'm from," Page said, referring to Nova Scotia.

Colbert asked what she meant about environmental racism in Canada. "It disproportionately impacts people of colour, whether it's the disproportionate amount of land fills placed next to people of colour in Nova Scotia, or whether it's a about a pulp mill in Pictou. Nova Scotia that has been there forever and has destroyed the land and the environment of First Nations people," Page said.

She wasn't done. "It’s really serious. We've been told, as we know it, by 2030, the world as we know it, that's it. If it was a movie, we'd have Bruce Willis in a suit talking about something -- please cast me -- and I can just pray the Aliens will come and have compassion for us and Amy Adams can do something."

It was then that Page quickly segued to politics and the attack on Smollett.