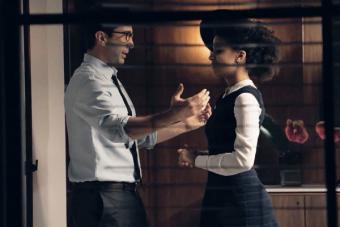 A powerful series of six short films have been released that put various types of sexual harassment on notice.

Collected under the banner #ThatsHarassment, the films by writer/director Sigal Avin were originally released in Israel. When Friends actor David Schwimmer saw the films he teamed with Avin and Mazdack Rassi of MILK Studios to redevelop the films for North America.

Based on real events, the films The Politician, The Doctor, The Actor, The Coworker, The Boss and The Photographer all feature men in positions of power conducting themselves in increasingly uncomfortable and inappropriate ways towards women who are often in vulnerable positions. Actors in the series include Schwimmer, who plays the titular boss in The Boss, Sex In The City alum Cynthia Nixon, who plays the patient in The Doctor, and Emmy Rossum, who plays a journalist stuck in an awkward interview situation in The Politician.

The full series is available for viewing on the #ThatsHarassment Facebook page.

The series creators have teamed with the Ad Council, an organization that creates media campaigns that tackle significant social issues, the National Women's Law Center (NWLC), a group that works towards equality for women and families, and RAINN, the Rape, Abuse & Incest National Network, the largest anti-sexual violence organization in America.

"The work RAINN is doing – and has done for more than 20 years – is incalculable. They perform a critical, life-saving service to victims of sexual assault and harassment, indiscriminate of age, race or economic status. I couldn’t be more grateful for their partnership and support," said Schwimmer, in a statement.

"With the national conversation focused on issues of sexual violence, these PSAs send a powerful message that sexual harassment should never be tolerated," added Jodi Omear, vice president of communications at RAINN. "We are thrilled to partner with David Schwimmer, Sigal Avin, and the Ad Council to help support survivors of sexual harassment and let them know that help is always available on the National Sexual Assault Hotline."

Watch a preview clip of The Boss