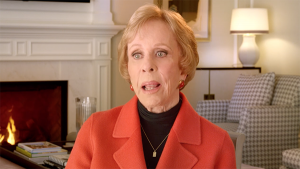 The four comedy veterans have recorded a three-minute public service video, beginning with their own perspective on growing old — "it's not as awful as everybody might think," says Burnett — and then explaining the value of adopting and supporting older dogs through the Grey Muzzle organization.

"Many older dogs are surrendered to shelters because their owners passed away or can’t afford their care," says Burnett in the video.

"And for some of them, there are no more options," Newhart follows up.

"When you support Grey Muzzle, you’re giving senior dogs the most precious gift of all," continues Reiner.

"The chance to live out their final years, months or days with dignity, grace and a happy smile on their face," finishes Tomlin.

Founded in 2008, Grey Muzzle's mission is to improve the lives of at-risk senior dogs. The organization does this by providing funding and resources to animal shelters, rescue organizations, sanctuaries and other non-profit groups nationwide to help support these dogs. Grey Muzzle estimates it has provided more than $2 million USD ($2.6 million CAD) to 190 different organizations since its inception.

The comedy stars, who among them have amassed dozens of Golden Globes, Emmys, Grammys and other awards and nominations didn't just discuss old dogs, though. They also gave some candid insight into their own journey of growing old.

"The best part of growing older is not dying," says Reiner in the video.

"The best thing is getting into movies cheaper. And if you tend to run with a young crowd as I do because I'm fit, that just makes them livid," says Tomlin, who adds a separate comment about her arthritic hands. "My hands used to look graceful and healthy. Now they look somewhat like decrepit kielbasa."

"Thanks to these legendary stars, more people will learn about at-risk senior dogs and how donating to Grey Muzzle saves and improves the lives of old dogs nationwide," said Grey Muzzle’s executive director Lisa Lunghofer in a statement.

Watch legends of comedy share their love for old dogs