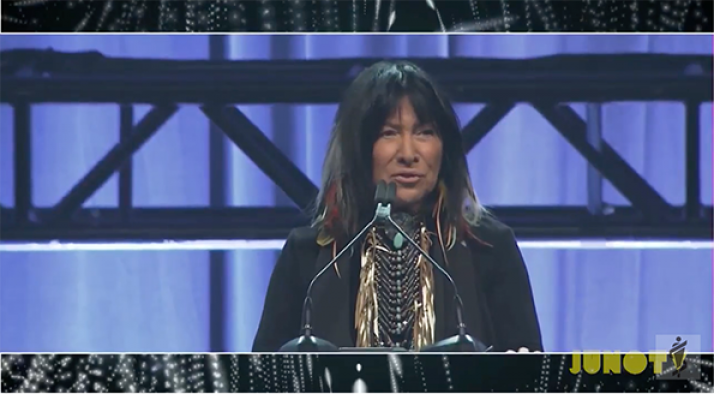 Musician and career-long Indigenous rights activist Buffy Sainte-Marie was given the Allan Waters Humanitarian Award at the Juno Gala Dinner & Awards, April 1 in Ottawa, by fellow musician activist Bruce Cockburn, the first recipient of the award back in 2006.

The singer-songwriter, born on the Piapot Cree First Nations Reserve in Qu’Appelle Valley, Saskatchewan, has been an activist for more than 50 years, condemning war in “Universal Soldier” and the confiscation of Indian lands in “Now That The Buffalo’s Gone,” and creating the Cradleboard Teaching Project in 1967 which “turns on the lights in public education about Native American culture.”

The 76-year-old, who released her debut album, It’s My Way, at age 23, most recently put out Power In The Blood in 2015, which tackles some of the same issues.

Here is the transcript of her speech, including the introduction from Cockburn, at the private awards ceremony, held the day before the televised Juno Awards, celebrating Canadian music.

“In 1965, I was a student at the Berklee College of Music in Boston,” said Cockburn onstage. “I was there to study jazz composition, but my parallel interest in folk music found a home in the still hot embers of what had been a dynamic scene for traditional musicians and a wave of singer songwriters whose work derived from tradition but was also shaping the future of pop music.

“I used to frequent a little joint called Club 47 near Harvard University. It had hosted Phil Ochs, The Lovin’ Spoonful, Bob Dylan and others, and though those who had achieved star status were now playing larger venues, it was still a place where the less established but artistically top-notch could be heard.

“I was in the house one night at the urging of a friend who wanted me to check out a young up-and-coming female artist they said was great, which turned out to be an understatement. There appeared onstage a smart, beautiful confident singer and writer of powerful songs, songs that dealt with love, peace, the issues of the day whose universality sprang almost paradoxically from her very specifically native Canadian soil. The kind of dignified passion with which she spoke and sang that soul was new to my 19-year-old ears, new and exciting and deeply moving.

“Over the years, that passion has kept burning at the heart of Buffy Sainte-Marie’s ongoing commitment to the betterment of the lives of indigenous people and by extension the lives of all of us.”

He then invited  Sainte-Marie onstage to accept the humanitarian award. Here is her speech:

“I thank the Creator for the gift of music that brings us here together tonight where  we celebrate creativity itself. When I was in my twenties, I learned that the greatest gift of success is sometimes to be in a position to help others and sometimes it’s money you give, but it might also be knowledge, or personal support, like training a band how to go on the road or passing along little-known information to audiences when they can’t find it anywhere else.

“Songwriters like me reinvesting our airplane tickets in discovering the bigger world, beyond the lights, camera and action of show business, sometimes we get the chance to report back startling news to our fans — not only the value of deep love affairs that inspire love songs —  which is always good — but also awful stuff like about the indigenous human trafficking in the Americas that still is going on today in Canada, and the horrors of the contemporary war rackets that make a lot of money for a very few.

“My greatest hit wasn’t my Academy Awards’ song [‘Up Where We Belong’] or even my Junos —  thank you CARAS [the organization behind the Junos] but to discover a few years ago that one of my early scholarship recipients had gone on to found The American Indian Higher Education Consortium and the Tribal College movements in the United States and Canada.

“So the point is that sometimes an artist can do some little thing that somebody else will maximize in ways that you could never had done yourself. So don’t ever stop doing those little things.

“Many thanks to MusicCounts [CARAS’ music education charity]  for giving instruments to hundreds and hundreds of Canadian schools, but regarding instruments there is a whole new problem that you ought to know about that could sink the music business. Because of exorbitant excess baggage charges for our instruments, musicians can no longer afford to travel to the cities, let alone to the remote areas of Canada. It’s not only affecting professional musicians; it’s also becoming impossible for high school and college bands to travel, and here’s how bad it is. For one flight, for an underweight guitar and a suitcase, I had an airline charge me $1,376 and it seems to me that this is the time for the music industry to be working together with the airlines and government and registered charities and the media and the travel industry to come up with a plan to make sure that live music can continue to aspire across Canada for years to come.

“The music itself is the miracle, whether you’re making it or listening to it; the feeling of a new song in your head that nobody else has ever heard before; the other musicians who play a lot better than you do and inspire you to practice correctly, so that you’re not just ingraining your mistakes; the business people who help you to get the music to the people; the friendships that you feel with your bandmates; the fans who care about you and watch you play and let you know that what you give through your music ripens their lives.

“I’d really like to encourage new songwriters. Please learn more than those same three chords that you all learned the first few months from your brother, when you were first playing; there are hundreds of others, but also please have the courage to go beyond your own role models and your heroes and whoever had a hit last month and bring us your own uniqueness, your own special style, and points of view. For Pete’s sake, we’re made in the image of the creator; that’s our green light for creativity not alone in the music business but in the whole world. Don’t be afraid. We’re designed to create. That’s what life is about. We create our songs, in our country, in our governments, in our communities, in our futures, and we’re always on the cutting-edge of that future right now.

“I’ve had a lot of success with my big love songs — yeah thank you very much — and it’s true that you never did get to hear a lot of my songs because of blacklisting when I was first coming out of the gate.  Maybe the songs were just too early, I don’t know, but now more than ever, I want to put my songs to work and I’m confident that at least here in Canada I finally have people on my side who can help the music get to the people who want to hear it.

“So I want to thank you all who help artists in the music business especially the people at [booking agency] Paquin Entertainment in Winnipeg and Toronto and Geoff Kulawick and his team at True North [Records] and [Polaris Music Prize founder] Steve Jordan and the people who bring us the Polaris Prize who enabled me and [artist] Tanya Tagaq a to get finally to work together on my new recording and video called ‘You Got To Run’ and especially everybody at CARAS for supporting music. The music of all kinds, all over Canada, and Canadian musicians throughout the world, and in gratitude for presenting me with the Allan Waters Humanitarian Award. I thank you at CARAS and you guys tonight so very much."

Read our feature interview with Sainte-Marie about her 50 years of activism.