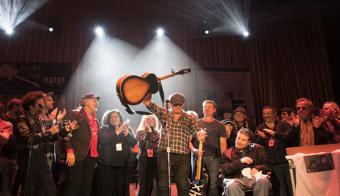 Classic rocker Bruce Springsteen hit the stage at "The festival that Bruce built" this weekend to raise money to support research into Parkinson's disease.

The Boss took to the stage at the Paramount Theater in Asbury Park, NJ on Jan. 18 as part of the 10-day Light Of Day Winterfest music festival. Springsteen's appearance at the "Bob's Birthday Bash" show marked the 12th time the Boss has appeared at that event in its 20 year history.

Proceeds from the Winterfest events go towards the Light Of Day Foundation. Formed in 2000 and named after a Springsteen-written song made famous by Joan Jett, the Light Of Day Foundation originally came about when music industry veteran Bob Benjamin was diagnosed with Parkinson’s disease, the degenerative disorder of the central nervous system. At his 40th birthday Benjamin asked that in lieu of presents money instead be donated to the Parkinson’s Foundation. After raising $2000 Benjamin, concert promoter Tony Pallagrosi and musician Joe D’Urso continued to do more fundraising events. Since then LOD has put on concerts in numerous countries, raising nearly $6 million USD ($7.84 million CAD) towards research to combat Parkinson's and related diseases progressive supranuclear palsy (PSP) and amyotrophic lateral sclerosis (ALS).

Springsteen made three separate appearances during the six-hour show, doing duets with each of Jesse Malin and Willie Nile before joining Joe Grushecky and the Houserockers for a 70-minute set. Springsteen traded songs with Grushecky throughout the set, performing "The Promised Land," "Atlantic City," "Darkness on the Edge of Town" and, appropriately, "Light of Day."

Additionally, LOD has started funding an initiative called Come Out In The Light Of Day which provides educational support for those newly diagnosed with Parkinson’s.