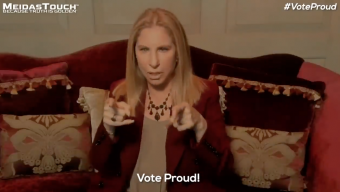 The centerpiece of the campaign is an online political commercial titled "Vote Proud" from MeidasTouch, a progressive Democratic PAC founded by brothers Ben, Brett and Jordan Meiselas.

"Enough is Enough, Vote Proud," Streisand declares at the end of the political video, which opens by claiming in 2016 half of LGBTQ+ community members didn't vote, which helped get Donald Trump into the White House.

The online video also features as its soundtrack the 1979 duet, “No More Tears (Enough is Enough),” sung by Streisand and Donna Summer and co-written by Vote Proud co-founder and songwriter Bruce Roberts.

With the resulting election of Donald Trump as the U.S. President, earlier gains by the LGBTQ+ community have been reversed, the online video, released under the banner “Enough is Enough, argues.

Vote Proud, also founded by Lisa Halliday and Jake Resnicow, aims to encourage LGBTQ+ members to register and vote in the upcoming presidential election to end the Trump administration.  "We must combat voter apathy among all marginalized Americans. Our movement demands all citizens are treated equally," the campaign says on its website.

MeidasTouch also has as the main goal the defeat of Donald Trump in November.  "Since our inception in early April, we have amassed an energized and engaged Twitter army of over 300,000 followers, garnered over one billion online impressions and started running anti-Trump TV ads across the country," the Super PAC says on its website.

MeidasTouch has released other anti-Trump videos with titles like "Vote Our Racism" and "Don's Next Con."

Vote Proud's Bruce Roberts said in a statement about his video collaboration with the anti-Trump Super PAC: “Vote Proud is thrilled to be MeidasTouch’s partner in this LGBTQ outreach. We aligned with MeidasTouch because we loved their hard-hitting persuasive videos and we felt it was important to take a stand and amplify our call to action for our community. There’s too much at stake for us not to reach and engage with the large part of the community that did not vote in 2016. I wrote Enough is Enough many years ago. Barbra Streisand & Donna Summer recorded it and had a global #1 record, selling millions. And all these years later it has become an anthem for change and equality in America today. I am proud to be working with MeidasTouch on this initiative to spread the message using my song."

MeidasTouch' Brett Meiselas in his own statement said of the Enough is Enough anthem and video: “In addition to being a co-founder of Vote Proud, an LGBTQ voting initiative, Bruce Roberts is also an award-winning songwriter, who penned Enough is Enough. We got the rights to the song, with Bruce’s total support - unlike the methods that Trump uses, where he does not even ask permission from the songwriters. I look forward to continuing our outreach to the LGBTQ community with Vote Proud."