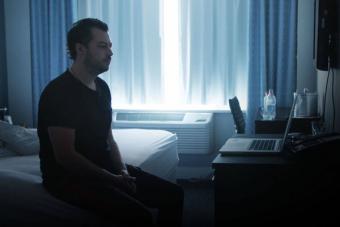 Toronto-based musician Andrew Cole has spent the last few years confronting bullying and it turns out he's got a number of high-profile allies helping him with his cause.

Cole's quest to record an anti-bullying song has been turned into a documentary film called #NoJoke which features a number of celebrity figures such as Slash, Ozzy Osbourne, Jeff Goldblum, the Red Hot Chili Peppers' Chad Smith, Sir Patrick Stewart, Jane Lynch, Meat Loaf and Cedric the Entertainer sharing their bullying experiences. Stewart and Lynch's contributions are particularly interesting because they admit that they were actually bullies when they were younger.

In a new trailer for #NoJoke, Cole explained why he built this celebrity "army."

"I've written a song to make a difference for people who are being bullied right now," said Cole in the trailer. "But the thing is, I'm a nobody, so I have to build an army."

#NoJoke, the film, is being produced by Peabody Award winner and three-time Canadian Screen Award nominee Jason Loftus. The film follows Cole on his travels as he tries to convince these A-list names to participate in his song.

"We have great respect for the artists who contributed to make this possible," said Loftus. "Frankly, at the outset no one knew who Andrew was and there was really no reason for them to do so. We’re thankful that so many of them cared. Some were affected by bullying — as victims or as bullies themselves — and wanted people to know they’re not alone.

"We also believe this film adds something important to the discussion about bullying. Bullying hurts, but what can we do about it? This film shows that there are different perspectives and views on what to do, and whether it’s working. And at times it challenges our conventional ideas — including how we draw the line between victim and perpetrator. We think it’s an ideal time for this conversation, and we thank the experts who participated in this project. We hope it will spark both personal reflection about how we treat each other, and discussion about how we best approach this issue together."

Although Cole calls himself a "nobody," he's not without his credible musical supporters. Since beginning his recording career in 2010 he's worked with the likes of Tom Cochrane, Kathleen Edwards as well as Alex Lifeson from Rush, amongst others.

#NoJoke doesn't have an announced release date yet, though it recently completed a successful Thunderclap crowd outreach campaign.