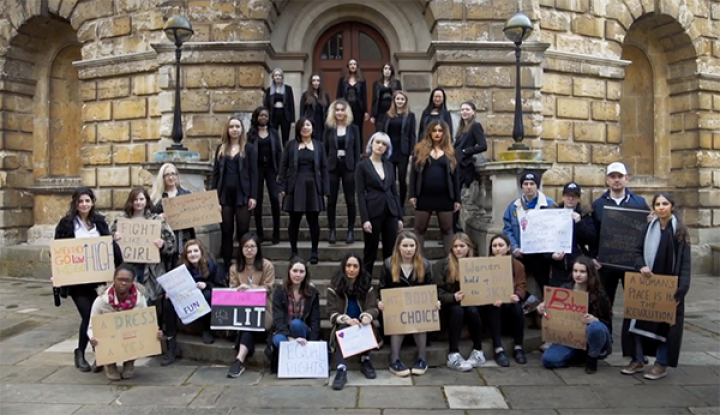 Millions of girls around the world are still being denied an education, so it's a powerful thing when smart women sing. That could be the tagline of the new video by Oxford University's all-female a cappella group the Oxford Belles whose spirited and faithful rendition of Cyndi Lauper’s classic 80s hit “Girls Just Want To Have Fun” — re-titled "Girls Just Want To Have Fun(damental Rights)" with embedded messages of empowerment — arrives on International Women’s Day, March 8, while benefiting three female-focused organizations.

In the final seconds of the video, it asks people to "help make a difference; click to donate" to one of three organizations: Oxford Sexual Abuse & Rape Crisis Centre; Malala Fund, which works to secure girls' right to a minimum of 12 years of quality education; and FORWARD (Foundation for Women's Health Research and Development), which advocates and actions for gender equality (as in, stop female genital mutilation and child marriage) and the broader rights of African girls and women.

Comprised of students from Britain’s prestigious University of Oxford and Oxford Brookes University, the Oxford Belles “were formed in 1995 to empower the women of the Oxford music scene, and have continued to do so ever since,” says a press release. The current lineup features Amelia Gabriel (who arranged the song), Jess Bollands, Teresa Rendell, Aaliya Gilbert, Sophie Tang, Alex Worrell, Emily Albery,  Caitlin Kelly, Kate House, Samantha Imafidon, Ellie Thomas, Caroline Hsu and Alexandra Lindsay-Black.

Shot at the university's Bodleian Library and Worcester College, the just-released “Girls Just Want To Have Fun(damental Rights)” video was directed by Marco Alessia and features the bubbly black-clad group singing and grooving on campus grounds. Throughout, various leading female academics at Oxford University hand-write and display “what they would say to young women today.”

As with the Oxford Belles, whose various members aspire to ultimately work in social services, law, the technology sector and medicine, the academics pictured run the gamut from Professor Dame Hermione Lee, president of Wolfson College (who advises students to "Be bold and calm, keep your nerve and never let yourself be bullied, patronised or condescended to)” to Dr. Rebecca Surender, Pro Vice Chancellor for Equality & Diversity (“Push yourself! You can achieve more than you think!”).

Of course, even a cursory visit to the websites of these three organizations presents depressing stats about female subjugation generally: “CARE believes that everyone has a right to basic education. But in many parts of the world children, particularly girls, are denied this right. In Niger, for example, only one in two girls attends primary school, just one in 10 goes to middle school, and only one in 50 goes to high school.

“Nearly two-thirds of the 77 million children not attending school worldwide are girls,” the CARE message continues. But where there are challenges, there is always hope.

As for how the video will help the above-mentioned charities, Oxford Belles president Jess Bollands tells Samaritanmag via email, “We are going to feature the logos of the charities at the end of the video, with links to their respective donation pages. We also wanted to give options to appeal to as many people as possible, and highlight the multiple issues that are at play.”

Bollands continues: “We really hope that with the attention the video receives, the charities that we are supporting will receive vital funds to help support women’s rights, safety and education. That would be the greatest achievement we could dream of.”