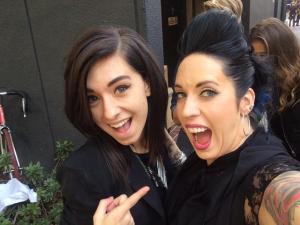 Kat Perkins, an alumnus of season 6 of The Voice with Christina Grimmie, has released a charity single, “Angels,” in memory of her late friend who was killed by an obsessed fan in Orlando June 10. She was 22. The song is also a tribute to victims of the nightclub massacre that same weekend.

"Christina was a beautiful person inside and out," Perkins said in a press statement. "I will miss her bubbly personality, quirkiness and talent. I wanted to honor her the only way I know how, with a song. Fly on, sister. This is a tribute to her and those lost that same weekend in the Orlando Shooting.  May we find a way to move forward in life making peace while letting go of evil. #ChooseLove”

"Angels" is available on all digital outlets, includig iTunes.

Perkins, who was roommates with Grimmie during the show, will donate all the proceeds to Grimmie's GoFundMe, which benefits Grimmie’s family.  Set up by Grimmie’s management Brian Teefey of LH7, the original goal was $4000 (USD) but it is now closing in on $200,000 with 17 days to go.

After that fund expires, Perkins will donate the proceeds to the Christina Grimmie Scholarship Fund for the Performing Arts at Cherokee High School in New Jersey, which was set up by the Grimmie family at her former school.

Perkins made it to the top 5 on The Voice with coach Adam Levine. After that, she embarked on a public speaking tour of schools where she talked to the kids about setting goals, being fearless and anti-bullying. Her song, “Fearless,” was produced by John Fields (Pink, Miley Cyrus, Selena Gomez).

WATCH THE VIDEO FOR "ANGELS":