U.S. Government Gets Cheesy To Help Farmers, Those With Food Insecurity 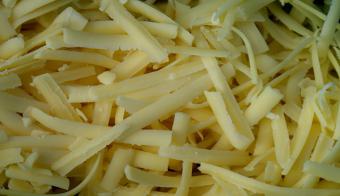 A cheesy decision by the U.S. government is going to help provide food for low income families and struggling dairy farms.

"We understand that the nation's dairy producers are experiencing challenges due to market conditions and that food banks continue to see strong demand for assistance," said Agriculture Secretary Tom Vilsack in a press release issued by the U.S. Department of Agriculture. "This commodity purchase is part of a robust, comprehensive safety net that will help reduce a cheese surplus that is at a 30-year high while, at the same time, moving a high-protein food to the tables of those most in need. USDA will continue to look for ways within its authorities to tackle food insecurity and provide for added stability in the marketplace."

Cheese production surpluses are at a 30-year high in the U.S., which has resulted in a 35 percent decline in revenue for related dairy farmers. In March it was estimated that 1.19 billion pounds of cheese was being held in cold storage, an 11 per cent increase from the same time in 2015.

Zippy Duvall, the president of the American Farm Bureau Federation, which represents farmers, said the government decision would be helpful.

"The Agriculture Department helped farmers and America's struggling families alike, today,” Duvall said in a statement. "The USDA's action will help alleviate the tough realities of the market and keep family farmers in business at a time when too many are leaving. More than 1,200 family dairy farms went out of business in 2015. We greatly appreciate USDA's taking this action to help our beleaguered dairy producers."

This is far from the first time the U.S. government has used cheese to feed those in need. In the 1980s and ‘90s, a period which popularized the term “government cheese," the Temporary Emergency Food Assistance Program was used to distribute the foodstuff to the poor when cheese stockpiles got too large.