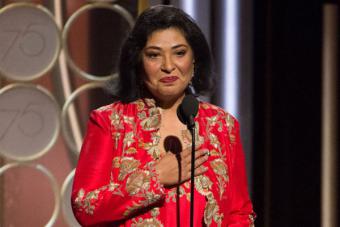 There was strong support for journalism at the 75th Golden Globe Awards held last night in Beverly Hills, California, as the Hollywood Foreign Press Association (HFPA) donated $1 million USD ($1.24 million CAD) to each of the International Consortium of Investigative Journalists (ICIJ) and the Committee To Protect Journalists (CPJ).

"There’s never been a more important time to safeguard the truth by supporting investigative journalism," said ICIJ director Gerard Ryle, in a statement. "We are extremely grateful to the Hollywood Foreign Press Association for its great expression of support for the ICIJ and for the important work being done by the Committee to Protect Journalists.

"Truth is under attack, both politically and economically, and the brutal reality of recent years is that journalists routinely risk their lives just for doing their jobs, even in countries once thought safe."

The Committee to Protect Journalists is an independent, nonprofit organization that promotes press freedom worldwide. The CPJ tracks obstructions to free press around the world as well as keeping detailed records on journalists who've been killed, imprisoned or exiled for doing their jobs. The organization also tracks freedom of press violations in the United States via the U.S. Press Freedom Tracker website.

The HFPA, which is normally better known for its members coverage of the entertainment industry, wanted its donations to support media colleagues doing difficult work.

"We HFPA journalists are committed to supporting humanitarian organizations, film restoration, and film education," said HFPA president Meher Tatna. "To date, we have granted over $30 million to those causes. And being an association of journalists, we are keenly aware of its importance, especially today."

This year's Golden Globe event was as much a showcase for progressive issues as it was an awards show. Numerous high-profile actresses wore black in solidarity with the #MeToo movement dedicated to ending sexual assault and harassment of women. Oprah Winfrey, who was this year's Cecil B. DeMille award winner, used her acceptance speech to not only support the #MeToo movement, but also to support hard-working journalists around the world.

"I want to thank the Hollywood Foreign Press Association because we all know the press is under siege these days," said Winfrey, in her speech. "We also know it's the insatiable dedication to uncovering the absolute truth that keeps us from turning a blind eye to corruption and to injustice. To tyrants and victims, and secrets and lies. I want to say that I value the press more than ever before as we try to navigate these complicated times, which brings me to this: what I know for sure is that speaking your truth is the most powerful tool we all have."