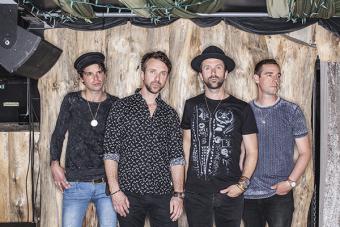 Canadian rock 'n' roll mainstays The Trews are setting an example by transforming one of their tour's biggest shows — at Toronto's Phoenix Concert Theatre — into a food drive. On Dec. 10, fans are encouraged to bring a non-perishable food item to the concert in support of Toronto’s Daily Bread Food Bank. The band themselves plan to match every donation with an equal-sized food donation of their own.

Thirteen years into their career The Trews have released a best-of collection entitled Time Capsule, and are currently celebrating with a tour of the same name. The album is a selection of songs from throughout their career.

Throughout this career, The Trews have contributed to various charitable causes. This past summer, the band — vocalist Colin MacDonald, guitarist John-Angus MacDonald, bassist Jack Syperek and new(ish) drummer Gavin Macguire who joined in 2015 — performed at Unison Jam (with the likes of I Mother Earth and Raine Maida) to raise money for the Unison Benevolent Fund, which provides emergency assistance for musicians and members of the music industry. Time Capsule also includes 2010’s "Highway Of Heroes," originally available on iTunes only in Canada with all proceeds going to the Canadian Hero Fund that provides scholarships to families of fallen soldiers.

According to its web site, Daily Bread Food Bank was founded in 1983 in an effort to assist those affected by the rising poverty and hunger problems in Toronto by creating a centralized distribution organization in the city. The registered charity acts as a distribution hub for food to both food banks (where clients receive a two to three day supply of non-perishable food, often supplemented with staples like bread, milk and vegetables) and to meal programs (where clients are usually marginally housed and receive daily prepared mails). Daily Bread provides food and support to almost 200 food programs across Toronto. They also strive to help create long-term solutions to hunger and run innovative programs to support people on low incomes.