The Tragically Hip Will Receive Humanitarian Award At Juno Awards 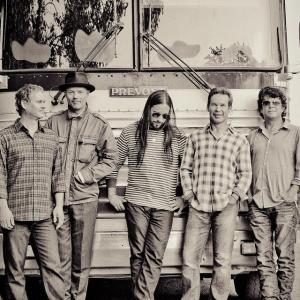 The Humanitarian Award recognizes outstanding Canadian artists or music industry leaders whose humanitarian contributions have positively enhanced the social fabric of Canada and beyond.

The Tragically Hip didn’t just touch millions of people with its music, but also made an impact through its philanthropic pursuits. The 15-time Juno-winning rock band has helped to raise millions of dollars for various organizations, including Camp Trillium, the Canadian Cancer Society, the Sunnybrook Foundation, the Special Olympics, Waterkeeper Alliance, the Limestone Learning Foundation, B’nai Brith Canada and the University Hospitals Kingston Foundation.

“For decades, this group of musical brothers has contributed to helping improve the social well-being of others and protecting the vast natural wonders of this country we call home,” Canadian Academy of Recording Arts and Sciences, The Juno Awards and MusiCounts president and chief executive officer Allan Reid said in a media release.

“After a challenging year when the power of kindness and generosity were more necessary than ever, we are proud to commemorate the band’s tireless activism and charitable achievements at The 50th Annual Juno Awards.”

The Tragically Hip included lead singer Gord Downie, who passed away from terminal brain cancer in October 2017, guitarist Rob Baker, drummer Johnny Fay, guitarist Paul Langlois and bassist Gord Sinclair. The five friends formed the group in their hometown of Kingston, Ont. in the mid-1980s and went on to sell more than 10 million albums worldwide before calling it quits after Downie’s passing.

The Tragically Hip was inducted into The Canadian Music Hall of Fame in 2005 and honoured with the Order of Canada in 2017.

“We are honoured to be receiving the 2021 Humanitarian Award,” said the band in the joint statement. “Our admiration for the past recipients makes it impossible not to feel humbled as well.

“We learned early on back in Kingston that you can accomplish great things with a stage and a willing audience. It’s about building community, and no one appreciated that responsibility more than Gord Downie. He was committed to social and environmental justice and we remain inspired by his example.

“Best intentions can achieve little without loyal support and action, so we consider this award as much a recognition for fans of our group, as they have been there for us through everything, and for every cause, and for that we are eternally grateful. We share this honour with you.”

The Tragically Hip Community Fund was created in 2004 to support local Kingston charities.

Among the causes The Tragically Hip have supported are: ALS and Parkinson’s research; AIDS awareness and fundraising; ending violence against women; food banks; and the environment.

The Tragically Hip played a wide variety of benefit and awareness-raising concerts in support of causes it believed in, including:

Downie also co-founded the Gord Downie and Chanie Wenjack Fund, a registered charity to support reconciliation between Indigenous and non-Indigenous peoples. Wenjack was an Indigenous boy who died trying to escape a residential school. He became the centre of Downie's Secret Path project, which included a solo album, graphic novel and animated film.

The Humanitarian Award will be presented during the May 16 Juno broadcast, which will air across Canada on CBC TV, CBC Gem, CBC Radio One and CBC Music, while streaming globally at CBCmusic.ca/junos.