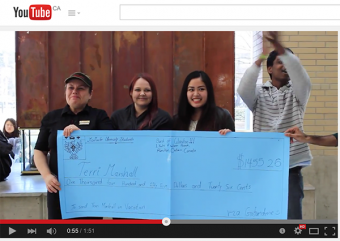 McMaster University students grumpy with exams or lack of sleep or assignment stress always get a smile from the dancing/singing Tim Horton’s employee Terri Marshall, at the Student Centre location in Hamilton, Ont.  A group of students recently surprised her with a flash-mob dance and a cheque for $1455.26 raised via a crowdfunding campaign. Of course, it was all filmed and posted to YouTube (watch below).

“Just so you guys know,” she says, as a student comes over to hug her, “it’s my husband and my 30th anniversary April the 20th and we’re going to go to Myrtle Beach [in South Carolina]. Thank you,” she says, wiping away a tear as students look on clapping and smiling. “I feel the appreciation all the time with you guys and I’m just overwhelmed and just so thankful. You made my day. YOU made MY day.”

Underneath the April 2, 2015 published video, it reads:

“Terri is employed at a campus Tim's at McMaster University, where she consistently puts a smile on the faces of students with her dance moves, singing, and messages on coffee lids. This year, students decided to crowdfund to send her on a well-deserved vacation. Her dancing can be seen here.”

In February 2013, a YouTube video went viral showing Marshall singing “congratulations, we have a winner” and dancing “Gangnam Style” after a RRRoll Up The Rim To Win win.  “Lovable Timmy's cashier goes to the extreme to make sure everyone knows that I got a free coffee with a Roll up the Rim winning ticket. Winner Style!” it read under the post that now has about 665,000 views.

It led to stories about such news outlets as  CBC, CHCH, Toronto Sun and Huffington Post.