TIFF Tastemakers Lounge Not Just About Free Stuff for Celebs 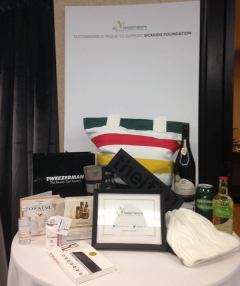 Over the years during the Toronto International Film Festival (TIFF), Tastemakers Lounge, a gifting suite now in its 11th year, has been visited by such well-known names as Woody Harrelson, Brad Pitt, Ellie Goulding, Ethan Hawke, Harvey Weinstein, Elisha Cuthbert, Sarah Polley, Freida Pinto and Samuel L. Jackson and they all leave with gifts from assorted brands.

But Debra Goldblatt-Sadowski and Leesa Butler, co-founders of Tastemakers Lounge, wanted to ensure it wasn’t all about giving free stuff to the famous. They wanted a philanthropic element to it too.

“Every year Tastemakers chooses some kind of charitable organization to partner with,” Butler tells Samaritanmag at the 2015 suite inside InterContinental Toronto Centre. “We’ve worked with SickKicks Foundation for many years and this year we’re happy to support them again.

“So in the lounge we have an autograph board and as talent comes through, we invite them to give us their signature. At the end of the festival, with the support of our sponsors — who have obviously participated in the lounge monetarily as well as with product — we’ll give a portion of the proceeds of the Tastemaker’s Lounge to SickKids, as well as the autograph board that they can use at an event in the future.”

The SickKids Foundation raises funds on behalf of The Hospital for Sick Children.  According to its web page, “community support, separate and distinct from government and granting agencies, is a critical source of funding for SickKids.” As of the fiscal year ending March 31, 2015, SickKids Foundation invested $108.4 million in child health research, learning and care. 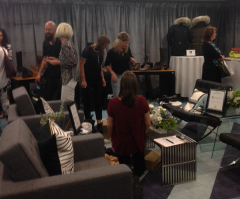 There is not a direct personal connection with SickKids, Butler says, adding “Certainly as a parent Debra Goldblatt loves the fact that SickKids is there and she does have healthy children. In fact, within the past six months, she tweeted when her son broke his arm, they went to SickKids and it was a blessing that they were able to go home and it wasn’t something more serious.”

Brands participating in this year’s lounge and, ultimately the SickKids give, include Sorel footwear, Tweezerman, The [Fix] chiropractic and massage clinic, The Botanist Islay Dry Gin, Saharajan natural organic skincare, and Pommies Cider.

Open for six days, from Sept. 10-15, usually appointments are made in advance, but bigger talent is always squeezed in and accommodated last minute. The talent can’t just zip into the Tastemakers Lounge and grab stuff from the stations set up in the suite. There’s an unspoken rule that they must listen to the pitch, pose for a photograph — and then leave with some free stuff, hopefully some things they will use and purchase in the future.