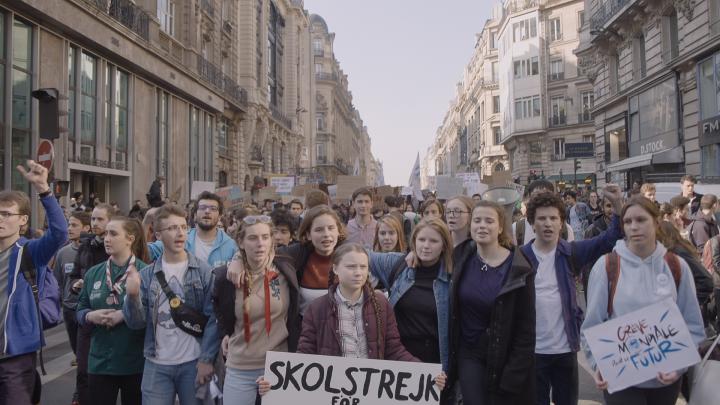 The on-going Coronavirus pandemic has forced the Toronto International Film Festival (TIFF) to go mostly online for its slimmed down 45th edition Sept. 10 to 19.  The 2020 festival will screen just over 50 feature films. Some will be in-person in socially distanced Bell Lightbox theaters, and others at drive-in and outdoor cinema screenings alongside Lake Ontario.  Here's 11 movies to catch at TIFF next month that have social justice, climate change and political conflict themes likely to engage Samaritanmag readers.  Tickets are available on the TIFF web site and each film has multiple screenings.

The U.S. investigative documentary follows an American family seeking refuge in Canada after alleged hacker Matt DeHart is targeted by the U.S. government.  Firsthand interviews and newly-uncovered footage is used to tell a stranger-than-fiction cyber-thriller story.

American jazz legend Billy Tipton is lauded as a transgender pioneer. The Canadian documentary recalls how an ambitious woman had to pass during her jazz career as a man in a masculine industry. Her birth sex gender was only revealed after Tipton's death. The trans icon's story is told by a diverse group of contemporary trans artists.

The actor-turned-director shot his debut feature in Toronto, as the family drama portrays Mortensen as a gay man caring for his ailing, solitary and homophobic father battling dementia. The frequent David Cronenberg collaborator wrote, directs and stars in the indie film.

Toronto filmmaker Michelle Latimer's documentary adapts Thomas King’s book of the same name to reverse the ongoing colonization of Indigenous peoples in North America as "inconvenient Indians" by allowing them to tell their own stories in paintings, films, music and art.   "It's about being authentic to traditional (indigenous) storytelling. For me, what is so exciting is I was able to use the form to tell a very un-classical story," Latimer tells Samaritanmag.

Based on true events, Tracey Deer’s debut feature uses a coming-of-age tale about a 12 year old girl, played by Kiawentiio, to recount the 78-day "Oka Crisis" or land dispute in 1990 between two Mohawk communities — Kanehsatà:ke and Kahnawá:ke  -- who resist a Quebec town and the police and eventually military forces to stop a golf course encroaching on their forest land and burial grounds.

Much has happened since directors Mark Achbar and Jennifer Abbott brought The Corporation, a critique of the modern corporation written by Joel Bakan, to TIFF in 2003. So Bakan and Abbott return with a sequel documentary that spotlights how the 2008 Wall Street and economic collapse has led major corporations to rebrand as socially responsible, with dire implications for the future of representative democracy.

The feature documentary was shot during the 76 days of a draconian lockdown in Wuhan, China, where the Coronavirus pandemic originated, and captures frontline doctors and nurses in four local hospitals treating patients battling the COVID-19 virus. "With this film, my intention was really to show the human conditions of Wuhan. My hope is that we can all focus more as viewers on how our experience with COVID-19 is similar, and not different," Hao Wu told Samaritanmag as the audience is put in Wuhan intensive care units as illness and uncertainty take hold.

The short documentary about 15 year-old Anishinaabe activist Autumn Peltier chronicles her journey from the Wiikwemkoong Unceded Territory on Manitoulin Island in Ontario to the United Nations in New York City to advocate for clean water to preserve Indigenous communities worldwide. Peltier will take part in an informal conversation with author Naomi Klein to stream along with the indie short film for free to international audiences.

The documentary uses newly declassified 1960s files to explore the the relentless surveillance and harassment of Martin Luther King, Jr. by J. Edgar Hoover's FBI and the American government to break the legendary U.S. civil rights activist before he was murdered in 1968.

Nathan Grossman's I Am Greta documentary follows teenage environmental activist Greta Thunberg’s ascent from being a high-school climate strike organizer outside Sweden's Parliament in August 2018 to leading a global movement.

Underplayed, director Stacy Lee — world premiere, Sept. 19 at OLG Play Stage at Ontario Place (followed by a live set with Top 100 DJ/producer REZZ, one of the main subjects of the doc).

Stacy Lee's feature documentary Underplayed explores gender inequality in the electronic music scene, where, in the last two years, only 7 percent of Billboard’s Top 100 DJ list were female.  "It was important for us as Black executives to be allies to these women, and to give a platform to tell their stories and to educate the public about how long women in entertainment have been tuned into the music industry. If you don't understand the history of this industry, then we're going to continue making mistakes," Underplayed producer Taj Critchlow of indie producer FELA told Samaritanmag.