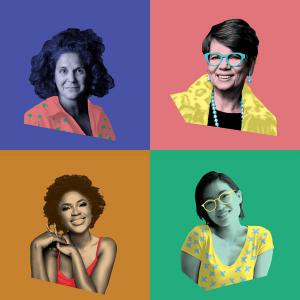 Corks will be popping today at Toronto’s TIFF Bell Lightbox — home of the Toronto International Film Festival and its many attendant programs — as a key initiative passes a fundraising milestone of nearly $1 million.

Share Her Journey​, TIFF’s five-year plan to “support and champion women’s voices in film and help move the dial across gender equity, sexual orientation, and ethnicity throughout the industry,” marks a whopping $971,000​ pledged to date, bringing its overall fundraising goal of $3 million within sight.

What’s more on this, International Women’s Day (March 8), TIFF unveils details of a new screenwriting residency for women, supported by Toronto journalist and broadcaster Micki Moore and the Share Her Journey fund.

According to a press release, “The 10-week Micki Moore Residency for women will provide a range of benefits including accommodation, mentorship, and a $3,000 award to one Canadian screenwriter, each year.

“Candidates for this program will represent the industry’s brightest women, showcasing their emerging writing and talent for feature filmmaking.”

It’s worth noting that Share Her Journey kicked off last summer, well ahead of the current laser-focus on the lack of gender parity in the film world, a point exacerbated by the (seemingly endless) stream of male celebrities accused of sexual misconduct. Indeed, the program is at once buoyed by the #TimesUp movement and a real-world agent for measurable change.

In a prepared statement, maxine bailey (stet), vice-president of advancement at TIFF, said “The generosity of support for Share Her Journey in its first year has been deeply encouraging. Donors across Canada, and around the world, understand the vitally important need to support a diverse range of voices within creative communities and the door to equitable opportunities for women has been closed for much too long. TIFF is committed to impacting positive change — and the scale of this challenge for women cannot be underestimated. Share Her Journey has only just begun.”

This year’s Share Her Journey fundraising goal is $1 million.

Toronto residents, meanwhile, should make their way to TIFF Bell Lightbox’s King West digs today, where International Women’s Day is being celebrated via a range of free Share Her Journey–focused ​programming in partnership with HBO, including screenings of documentaries, films, and series from women directors, writers, and producers, as well as women-focused panel discussions.

Elsewhere in the Lightbox, there will be a special Share Her Journey Wiki-a-thon in the Film Reference Library. Other forthcoming Share Her Journey highlights include an expansive retrospective on the films of feminist French filmmaker Agnès Varda​ (who netted a 2018 Oscar nod for her brilliant doc, Faces Places); complimentary passes to the TIFF Kids Industry Forum for emerging filmmakers; a TIFF Kids Forum keynote from award-winning filmmaker Genevieve Clay-Smith​ of Bus Stop Films, whose mission is to provide a film-school experience for people from marginalized communities; TIFF’s Talent Labs​ and Rising Star​ programmes that maintain gender equity amongst its participants; and engaging conversations with leaders including Amma Asante ​(A United Kingdom), Molly McGlynn ​(Mary Goes Round), and Joyce Wong​ (Wexford Plaza).