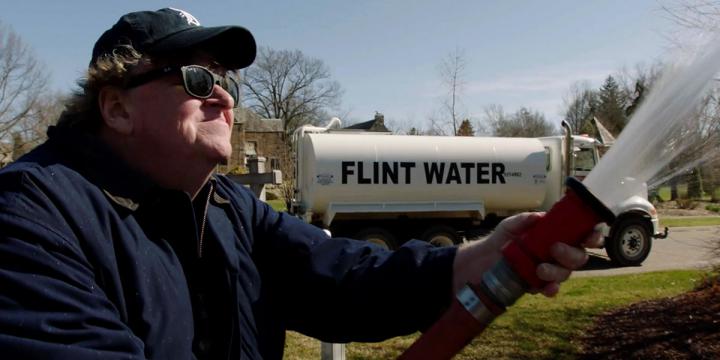 The Toronto International Film Festval (TIFF) kicks of tonight (Sept. 6) and runs for the next 10 days, screening 342 films (go here for listings and ticket info). Here's six TIFF doc titles promising a captivating exploration of how we got into this Trumpian mess, and how to get out.  Thom Powers, programmer of the TIFF Docs sidebar, comments on them all.

1. Fahrenheit 11/9, Michael Moore: By now you may have seen the trailer for Moore's incendiary bromide against Trump and his presidency, an unashamed call-to-action -- not hope, action --  for Americans to get to the polls in November. If anything, Moore takes aim at complacency among the American people. "This is a very timely film, but also timeless. People should not come expecting that it will 90 minutes of jokes about Donald Trump. There's a critique of Donald Trump, but there's a broader critique of the American political system that will surprise many people," Thom Powers, programmer of the TIFF Docs sidebar, says of the documentary.

2. This Changes Everything, Tom Donahue: A Time's Up-era film culturally specific to Hollywood, yet one women will relate to is Tom Donahue's star-packed This Changes Everything. Geena Davis  Meryl Streep, Jessica Chastain, Shonda Rhimes, Reese Witherspoon and Sandra Oh talk gender politics in a movie industry that goes way back when it comes to controversy and context. "For people who feel they know the subject, they're going to learn a lot more in the history presented. I learnt about different feminist filmmaking movements in the 1960s and 1980s that were earlier trying to campaign for the some  of the same gender equity that has more momentum today. To me this film is very illuminating, and also inspiring." Powers says.

3. American Dharma, Errol Morris: If this documentary won't get people off their couches to take action for change, what will? Steve Bannon, a lightening rod for public political resistance, sits down with veteran doc maker Morris for a series of interviews. "It's a continuation of the type of project he (Morris) previously did with Robert McNamara in The Fog of War, or with Donald Rumsfeld in The Unknown Known. But Morris in small ways is changing his approach," Powers explains.

For one thing, he's abandoned his Interrotron device that was a stylistic choice in his earlier films that allowed Morris and those he interviewed to have a one-on-one personal conversation without eye contact, as he instead used a variation of the teleprompter. "In American Dharma, we see Morris sitting across the desk from Bannon, and we see Morris challenging Bannon more than I remember his challenging presence in past films," Powers explains.

4.  Alexis Bloom, Divide and Conquer: The Story of Rogers Aisles: Bloom's career-spanning film about the Fox News creator goes to the origins of Roger Aisles, an American political media svengali who launched Fox News and the careers of celebrity anchors like Sean Hannity, Bill O’Reilly, and Megyn Kelly, before in 2016 going down in flames amid multiple accusations of sexual harassment, and before the #MeToo became a mainstream movement.

The film's archival footage of Aisles goes back to his early roots as a producer on The Mike Douglas Show in the 1960s.

Now if you think you don't want to spend an afternoon at TIFF with Steve Bannon or Rogers Aisles, Powers says think again. "For a liberal audience, there has been a tendency to block out a Roger Aisles or a Steven Bannon as distasteful figures. But they are figures who have largely shaped the world that we live in today. And these films are an important way to reckon with those careers," he said.

5. Astra Taylor, What is Democracy?

As the democratic experiment hits a pothole or two, Powers points to Taylor's collaboration with the National Film Board of Canada certain to draw politically engaged audiences to the Toronto festival.  "The third of her films to show at TIFF has a philosophical bent. Here meditation about the democratic process really expresses how democracy is a constant practice. It's not about a single election," he said.

The documentary's theme is, if you want to take part in, and benefit from democracy, it's important to know what the word means.

Powers adds that, with hindsight from the 2016 U.S. presidential election, many Americans likely put too much faith in Hilary Clinton as a White House contender to become a "one-person symbol and agent for change."

"What we see throughout this film is the importance for people to be empowered in their own lives, individually, and not waiting for one political switch to happen through one election," he added.

File this documentary, which follows Tracy Edwards as the skipper of the first all-female crew to enter and sail the Whitbread Round the World Race in 1989, under women's achievement and resilience. "This is a film that audiences will be thrilled to discover," Powers ventured as he touted a documentary about a gruelling sailing race considered off-bounds to women, but with which Edwards and her fearless crew overcome sexist condescension and the elements to prove their mettle.

It's no coincidence, the TIFF doc programmer adds, that Maiden, directed by Alex Holmes, and other social cause movies come amid the Trump era, and two years after the U.S. president entered the White House.

"These films are happening two years after the presidential election, and two years is the time needed for a great documentary maker to synthesize and analyze and distil the ingredients to make really satisfying films," Powers insists.