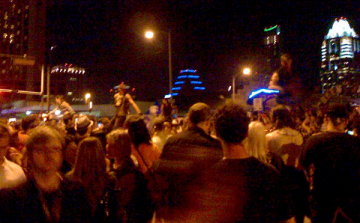 The SXSW Cares Fund, set up to help people affected by last week’s fatal car crash at South By Southwest in Austin, TX, has surpassed $62,000 in a matter of days, it shows on the landing page of SXSW.com.

Two people died, and 23 people sent to area hospitals when 21-year-old Rashad Owens recklessly chose to take off from a drunk-driving stop at a gas station and instead sped up a one-way street, eventually plowing through a traffic barricade and into pedestrians on Red River Street at the jam-packed SXSW music festival, around 12:30 a.m. on March 13. (Updated March 17 at 3:45 p.m. ET: Sandy Thuy Le, 26, has also died from her injuries).

SXSW is a set of film, interactive and music festivals and conferences that takes place in Austin every March, drawing tens of thousands of people. The music component — the largest of its kind in the world presents performances from more than 2,200 acts on more than 100 stages — had only just kicked off March 11 (ending on the 16th)

The SXSW Cares Fund — which raised $33,000 in the first 24 hours and as of Monday morning had reached $62,700, and counting — was organized by SXSW, the city of Austin, and the Mohawk, the live music venue located on Red River where the crash took place.

“We have spent today working with SXSW and the City to create a relief fund for the victims,” Mohawk owner James Moody said in a statement. This is our number one priority — their care and support. We are a community here that exists far beyond the 10 days of SXSW. Our intent is to come together to help the families of each and every one of the victims.”

According to the Austin Police Department, Owens has been charged with capital murder and further charges will be laid at a later date. All the surviving victims were between the ages of 17 and 39, the majority in their teens and 20s. Fifteen people were treated and released. Eight are still in hospital, five in critical condition.

Steven Craenmehr, 35, creative director of Amsterdam’s MassiveMusic, was riding a bicycle when he was struck and killed. Austin resident Jamie Ranae West, 27, was a passenger on a moped. Both were pronounced dead at the scene, according to the Austin Police department.

“The funds will be disbursed to those most affected through a community-based process to be created by representatives of SXSW, the Austin Convention and Visitors Bureau and the City of Austin with the Austin Community Foundation,” it reads on the SXSW Cares Fund reads.

Donations can be made in any amount, either as a one-time payment or monthly ongoing payments. The SXSW Cares Fund is part of the Austin Community Foundation, which was founded in 1977.

“ACF was created by and for the people of Austin to connect donors with the causes they care about,” it says.

“Right now the Austin Community Foundation manages more than 900 charitable funds, established by individual donors, corporations, nonprofit agencies and partner foundations. Because of our unique status as a nonprofit and charity, ACF brings an efficiency of scale to donors, allowing charitable dollars to go as far as possible toward improving life for all Central Texans.”