Stephen Colbert Raffle Raises Over $300K For Veterans and Students 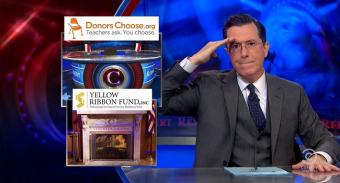 Stephen Colbert ended The Colbert Report with a song and a fundraising tally. The talk show host and political satirist, who will take over the Late Show from David Letterman in 2015, announced that the desk and fireplace from his set raised $313,420 (USD) for charity.

Good thing, he said, because if he didn't clear out his studio by next Thursday he wouldn't get his security deposit back.

“Funds raised will be split 50/50 between two amazing causes: The Yellow Ribbon Fund and DonorsChoose.org,” it read on omaze.com.

The money will help DonorsChoose.org provide supplies for students in need and Yellow Ribbon Fund support injured veterans at home.

Leading up to the end of his nine-year run with The Colbert Report, The Colbert Nation — the name given to his fans and viewers — was asked to donate $10 via Omaze to be entered into a raffle. Each $10 earned another entry and there was no limit to how many times one could enter.

The night of his final show, Dec. 18, long before he signed off singing “We’ll Meet Again” with a motley bunch of celebrities from Big Bird to Michael Stipe, Colbert said he had “a little happy news for the Colbert Nation.

“Last week I put my desk and fireplace up for raffle with the proceeds going to the Yellow Ribbon Fund and Donors Choose and I’m proud to announce we raised three-hundred-and-thirteen thousand dollars. Boom,” he said, saluting. “Congratulations. That’s pretty good.

“Three-one-three, three thirteen,” he said, using his fingers to enforce the amount. “That’s a lot of green, daddy. Congratulations to winners Michelle Olson and Tom Laudate. Now I‘m trusting you guys. I don’t want to see my desk show up on the battlefields of Syria.” An animation is shown of a blue C-shaped Report desk as an armoured tank with a militant in the centre.

According to Omaze, the goal was to raise $225,000, so Colbert’s final fundraiser as the satirical conservative political pundit surpassed his heart’s desire.  That was no joke.