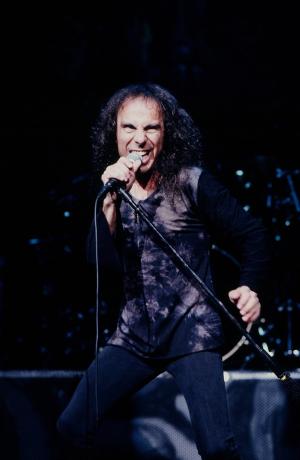 The event is hosted on rollinglivestudios.com and begins at 5 p.m. EST, raising money for The Ronnie James Dio Stand Up and Shout Cancer Fund, founded in memory of the late musician who was the frontman of Dio, Black Sabbath, Rainbow and before losing his battle with stomach cancer in 2010.

The Ronnie James Dio Stand Up and Shout Cancer Fund is dedicated to supporting cancer prevention research, raise awareness and educate the public with the focus that early detection and prevention saves lives. According to their website, the Fund has raised over $2 million in its history.

"He was an artist who was not only well respected for his talent, but also admired and loved by his peers and fans worldwide, some of which included renowned celebrities, musicians, and prominent individuals from all walks of life," says the Rolling Live press release for the event.

The virtual fund-raising concert will also feature exclusive archival footage from Dio's life and long-spanning career, and footage from Dio Cancer Fund events held in Los Angeles since 2011 when the Fund began.

There are items being auctioned, including a "grab bag" of specially selected vintage DIO and Dio Cancer Fund event merchandise which includes a limited number of copies of Dio's biography, event tee-shirts, baseball caps, laminates, and lithographs.

Tickets are now available for the VIP After Party the next day, July 11, also at 5 p.m. EST. They can be purchased at: https://rollinglivestudios.com/di

Since 2016, the Dio Cancer Fund has also supported the research of Dr. David Wong and his team at the UCLA School of Dentistry in creating a saliva test for the early detection of cancer.

The Fund has previously donated to the T. Martell Foundation for Cancer AIDS and Leukemia Research, the stomach cancer unit of the M.D. Anderson Cancer Center in Houston, where Ronnie was treated for stomach cancer during the last six months of his life.