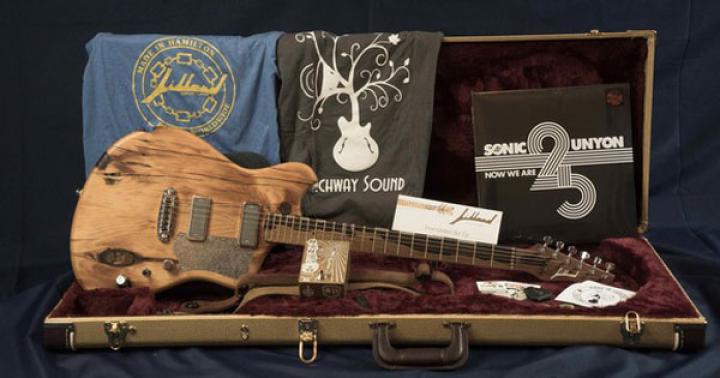 Four Hamilton, Ontario-based companies have come together to create 25 custom guitars out of wood from a historic local building that will be sold to support An Instrument For Every Child, a key initiative of the Hamilton Music Collective (HMC).

Started in 2010, An Instrument For Every Child gets professional musicians to introduce music to young and often disadvantaged children with the goal to "enrich every child’s social, emotional and cognitive development" and "provide access to instruments and skilled instructors for children from all walks of life."

With Hamilton-based independent record company Sonic Unyon Records celebrating its 25th anniversary, the label that has released music from the likes of Pixies, Danko Jones, Thrush Hermit, Voivod and Hayden has teamed with luthier Jay Jillard of Jillard Guitars to build 25 instruments. The collaboration is called the 99 James North Project.

The Hamilton connections run deeper, though. The wood being used to build the guitars has been reclaimed from 99 James North, a four-story Victorian building built in 1872 and restored in 2015. Cottage 13 Tattoo, a tenant at 99 James North, has provided custom artwork designs for the guitars. Area retailer Birchway Sound will assist in the guitar sales.

Hamilton acts Terra Lightfoot; Chrisy Hurn of Basement Revolver; and Matk Milnee, Sonic Unyon co-founder and member of Tristan Psionic consulted with Jillard Guitars on the design of the instruments. The likes of Dan Mangan, Bahamas, Lightfoot, The Trews and Dizzy have all played Jillard Guitars at events and concerts.

Pricing and ordering information is available via Jillard Guitars, which has a page dedicated to the different bodies available.

"Each guitar features unique grain and grit, symbolizing the distinctive resilience of Hamilton, and the beauty carried within that iconic determination," it says on the 99 James web page. "With artwork from Cottage 13 Tattoo engraved on the back of each instrument, we give a nod to Hamilton’s history as the Electric City, and celebrate our city’s unique art and culture."

In addition, "This exclusive run of instruments feature Canadian hardware and parts, including Graphtech Labs Hardware, McNelly Pickups, and D’addario Strings. Each handmade guitar comes with a limited edition 99 James guitar pedal from Southampton Pedals, custom Jillard Guitar strap, ‘Now we are 25’ record from Sonic Unyon, limited edition clothing, and more from these great Canadian companies. Each guitar comes with a custom, Canadian made hardshell case, molded specifically for these guitars."

Watch a video about An Instrument For Every Child