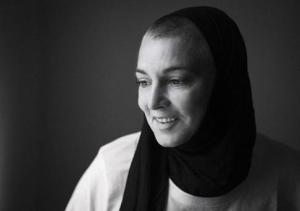 Sinéad O’Connor has recorded an interpretation of “Trouble Of The World” and is donating all of the profits from its digital release through Heavenly Recordings to Black Lives Matter (BLM) charities.

“Trouble Of The World” is a traditional gospel number that’s probably most closely associated with singer Mahalia Jackson, who sang it in the 1959 film Imitation of Life.

“For me the song isn’t about death or dying,” O’Connor said in a media release. “More akin, a message of certainty that the human race is on a journey toward making this world paradise and that we will get there.”

“Trouble Of The World” was recorded with musician, composer and producer David Holmes in Belfast, Northern Ireland following the easing of COVID-19 lockdowns earlier this year.

Director, DJ, former Big Audio Dynamite member and band manager Don Letts shot a black-and-white video for “Trouble Of The World” that opens with O’Connor walking down a London, England street carrying a placard with a photo of Jackson while wearing a Black Lives Matter T-shirt. Performance footage is interspersed with still photos from Black Lives Matter demonstrations.

The song, as well as an a cappella version of it, were released on Oct. 2 as part of the Bandcamp Fridays initiative, where Bandcamp waives its revenue share from sales on its website. Bandcamp Fridays will continue on the first Friday of every month until the end of the year. “Trouble Of The World” is also available through other streaming services.

“Trouble Of The World” follows up O’Connor’s rendition of “Trouble Will Soon Be Over,” an old gospel blues song she contributed to the 2016 God Don’t Never Change: The Songs of Blind Willie Johnson tribute album.

Black Lives Matter was founded in 2013 in response to an acquittal in the killing of Trayvon Martin. Black Lives Matter Foundation, Inc is an organization in the United States, United Kingdom and Canada with a mission to eradicate white supremacy and build local power to intervene in violence inflicted on black communities.

O’Connor’s support of Black Lives Matter was behind her recording “Trouble Of The World,” and it’s also why she’s donating all of the proceeds from it to a central fund that designates resources for regranting to state and local Black Lives Matter chapters.

Since achieving stardom in the late 1980s and early 1990s with her first two albums, O’Connor has attracted almost as much attention for her activism and sometimes controversial statements — particularly about religion and the sexual abuse of children — as for her music.

O’Connor was ordained as a priest by an independent Catholic group in the late 1990s and has asked three popes to excommunicate her from the Catholic Church. Though she still uses Sinéad O’Connor professionally, she converted to Islam in October 2018 and now goes by the name Shuhada Sadaqat in her personal life.