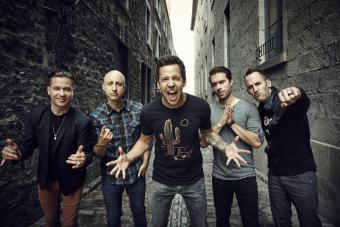 Simple Plan Foundation, the philanthropic organization created by the multi-platinum Canadian pop-rock band, handed out $225,000 at the end of 2018, according to a press release issued by its record label Warner Music Canada.

In all, over 30 charities received support from the Montreal band's foundation after Simple Plan completed 75 concert dates around the world in 2018.

The overriding theme for the charitable organizations that most recently benefited from the band's generosity is they all in some way help young people in need.

And they join other charities that have received donations totalling $2.5 million since the Simple Plan Foundation was first unveiled in December 2005.

A look over the latest organizations to benefit from the foundation -- from the St-Justine Children Hospital and Montreal’s Children Hospital to Sick Kids Hospital in Toronto, The Lighthouse Children and Families, and Dr. Julien’s Music Garage -- reveals groups in part working to help sick children battling with physical and mental illnesses.

That effort, which included a focus on boosting awareness for depression immediately after the foundation started in 2005, was underlined by Simple Plan bassist David Desrosiers stepping away from a European tour in May 2017 as he battled his own mental health issues.

"I have battled depression on and off for a long while now but the time has come to explain why there are times when I cannot be with my bandmates playing shows for you," he wrote on his Instagram account at the time.

Desrosiers and fellow band members -- frontman Pierre Bouvier, drummer Chuck Comeau, and guitarists Sebastien Lefebvre and Jeff Stinco -- on their foundation website say their philanthropy is a way to give back and make a difference.

"After reading thousands of letters and e-mails from our fans and talking to them at our shows, we know very well how tough life can be for kids growing up," they say in a statement.

"It breaks our hearts to see so many young people fighting to survive while feeling depressed and lost. We want our foundation to help them find their way and show them that there's always a light at the end of the tunnel, that things can get better," the band adds.

Also supported are charities helping young people deal with addictions, poverty, homophobia and the consequences of war as kids everywhere move into adulthood.

Other organizations have received foundation support in earlier years, and others are new recipients like the Dr. Clown Foundation and the New Pathways Foundation, a charity devoted to helping First Nations youth in Canada.

In part, the foundation also supports musical training in schools to help young people find their passion and a purpose in life.

The Simple Plan Foundation accepts donations to support its efforts. And it worked with corporate partners like Apple, Lava/Atlantic and Warner/Chappell Music, for example, to ensure the proceeds from each download of their single “Save You” has been donated to the foundation to fight cancer.

"The Simple Plan band members as well as the foundation’s volunteers would like to thank all the fans without whom all this would be impossible. They hope to be able to keep counting on fans’ loyal support in the future," the band members said in a statement as they announced their

(Please support Samaritanmag's original journalism by making a PayPal contribution or EMT transfer using  info@samaritanmag.com so we can increase the amount of content and writers we hire. Samaritanmag is the anti-tabloid, covering good people trying to change bad things. Let's make this thing bigger than TMZ.