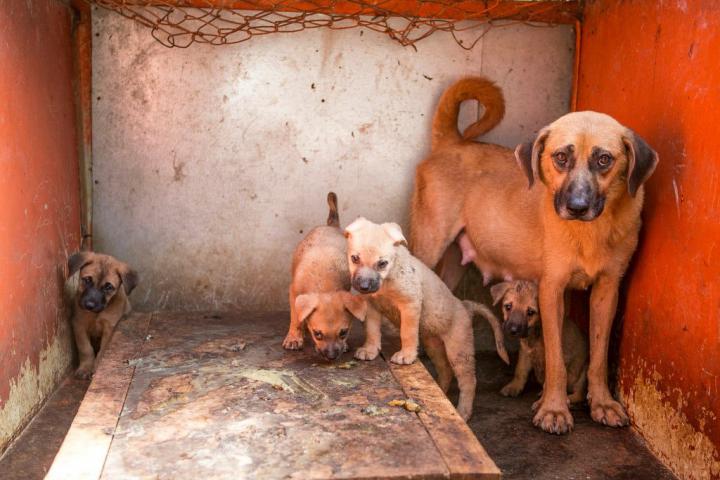 A generous donation from America's Got Talent judge Simon Cowell has helped a team from animal advocacy group Humane Society International rescue around 200 dogs on a meat farm in Namyangju, South Korea.
"With us leaving next week to save 200+ dogs on a SK dog meat farm, TV personality @SimonCowell has agreed to match ALL donations up to £25,000! [CAD $41,600]" HSI said on Sept. 28 on its Twitter account.
"Humane Society International is one of the only global animal protection organizations working to help all animals—including animals in laboratories, animals on farms, companion animals and wildlife—and our record of achievement demonstrates our dedication and effectiveness," it states on its "about" page.
By Oct. 2, HSI reported its animal rescue team had arrived in South Korea to begin its rescue, as it aimed to take the affected pups to the U.S., Canada, Britain and the Netherlands for recovery and adoption.
"Our Animal Rescue Team arrived in South Korea this morning. We will be going LIVE from the dog meat farm on Facebook and Instagram throughout the rescue. Please stay tuned!" the animal advocacy group added in a statement on a fund-raising page. "We have met our matching gift goal of £25,000, but our work is not over. Please donate to help us bring these dogs to safety and protect animals everywhere from suffering," HSI added.
Cowell in 2017 backed HSI’s #EndDogMeat campaign, including telling Good Morning Britain in the U.K, ahead of another rescue team completing another dog rescue mission: "It's like eating your friend. It's the fact you're eating such a kind, helpless, sweet animal."
The latest HSI team was also drawn to South Korea, where pups are farmed for a dog meat trade as they are confined in wire and cement cages and treated as livestock, not pets.
Around 120 of the 200 dogs targeted for rescue on the South Korean dog farm are set to end up in Canada, mainly in Toronto and Montreal. The HSI team and campaign aims to work with the authorities in South Korea to encourage dog to be treated as pets, and not sold for eating as are cows, pigs and chickens.
HSI estimates around 30 million dogs are killed for consumption around the world, including in parts of East Asia.
The animal advocacy group is also helping dog meat farms close down their operations and switch to growing crops and other forms of agriculture.
(Please support Samaritanmag's original journalism by making a PayPal contribution using the email info@samaritanmag.com so we can increase the amount of content and writers we hire. Samaritanmag is the anti-tabloid, covering good people trying to change bad things. Let's make this thing bigger than TMZ.)
モッズコートのメンズコーデ術３選 , メンズファッションメディア