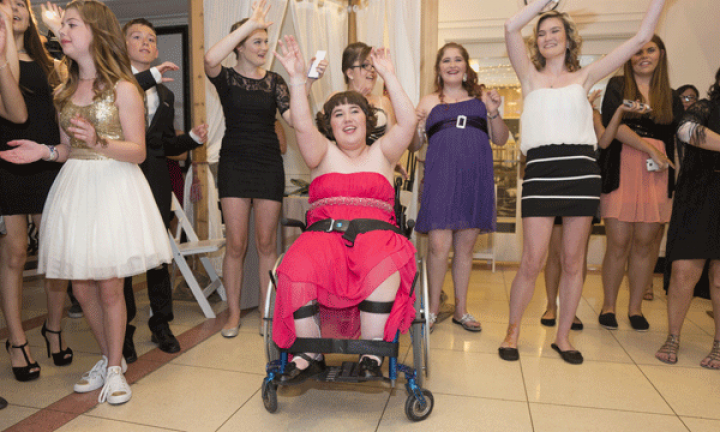 The prom is one of the highlights of the school year for many students, but it’s a celebration that teenagers with serious health issues are often unfortunately shut out of. Patients at Toronto’s Hospital for Sick Children (SickKids), however, have been given their own graduation party to ease their disappointment and have a fun night with their peers — and a teen committee gets to plan it.

"We noticed that a lot of teens were missing out on proms, dances, social events and all of those things that happen at the end of a school year because they’re in the hospital,” Susie Petro, a child life specialist for child and family-centred care programming, tells Samaritanmag.

The hospital hosted its sixth annual prom-inspired after-hours exclusive teen event earlier this month, and dozens of young people and some special guests had the opportunity to dance the night away in an Arabian Nights-themed environment to mark the coming-of-age milestone.

An area of the hospital was lavishly decorated, food and soft drinks were served, draws and giveaways were held, and there were games, a photo booth, themed props and music provided by SickKids patient Alex Salmon, who goes by the name DJ Skinnzy.

A Bollywood dancer and the On The Floor dance crew provided early entertainment along with the hospital’s therapeutic clown, A. Leboo, who for this night was known as A. LeGenie. 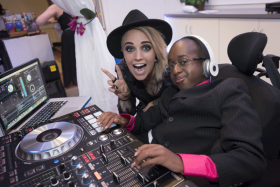 MTV host Phoebe Dykstra was on hand and players from the Toronto FC soccer team helped break the ice by dancing with the girls, who also felt like celebrities after volunteers from George Brown College and local salons came in to style their hair, apply makeup and nail polish, and provide henna tattoos so they looked their best at the party.

These events began in 2009, with the impetus coming from the hospital’s child life department.

This year's prom was made possible through the Storfer Dream Delivery program and about $6,000 from the Storfer family’s Turning Dreams Into Memories Ann Storfer Endowment Fund. The program provides unique opportunities for chronic and long-term patients to fulfill dreams and acquire life-long memories while at SickKids.

For the prom, SickKids has a 15-patient council comprised of teenagers who come up with ideas about food, entertainment and themes, and hospital representatives and volunteers do their best to carry out their wishes. Planning for this year's party began in March. Long-term patients confined to the hospital, as well as long-term outpatients were invited to attend along with a guest of their choice.

It's in a comfortable environment, as some teens don’t feel comfortable going to their own proms because of the way they look or the medical issues they may have,” Petro says.

"The kids always love it. We receive really positive feedback at the end. They really enjoy being out of their rooms, even if it’s just for a couple of hours, and they can interact and make a connection with other kids.

"It's not that the kids at their schools can’t relate to them, but it’s a different relationship that they have with other hospitalized children. They’re going through the same things and having the same experiences, and they may be missing their school or going to prom.”

"That was certainly the case for Jasmin Singh, a 16-year-old patient who wrote a blog entry about the prom. She was diagnosed in 2007 with granulomatosis with polyangiitis. This rare, life-threatening disease is a multi-system auto-immune disorder that can attack blood vessels, the respiratory system, 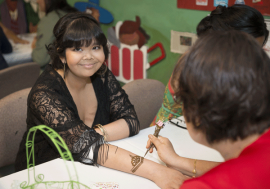 kidneys, eyes, ears, throat, skin and other organs. Singh was hospitalized for 112 straight days last summer and underwent weekly surgeries for two months. That forced her to miss her grade nine prom and she was very disappointed when she couldn’t attend her grade 10 prom this year with her classmates because of her ailments.

"The SickKids prom made up for it because I ended up seeing some friends I hadn’t seen in about a year and I made some new friends,” Singh tells Samaritanmag. “I got to bring my sister and there was lots of dancing.”

Singh is still fragile and she only started walking again a month ago, but she was discharged from SickKids a couple of weeks before the prom and bought a new dress for it. She got her hair styled in a way she’d never had before and got a henna tattoo at the hospital, which helped give her confidence to socialize and dance with other teens as well as the Toronto FC players — who often visit SickKids, as do members of Toronto’s other professional sports teams.

"But if I’m invited again, I’d definitely go to the SickKids prom,” she says. “It’s fun and gives you a chance to relax and feel safe.”

Parents also get peace of mind, as they were invited to watch a Second City comedy show and a movie down the hall from where their children were partying.

The parents aren’t too far, but far enough away that the kids can have a good time on their own,” says Petro. “It’s a time for them to be able to dance and bond with other teens.”