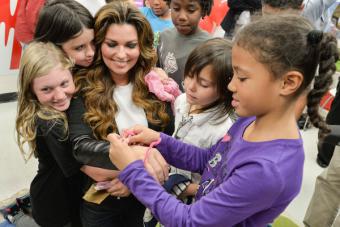 Shania Twain is using the release of her forthcoming album, NOW, due Sept. 29, to help schoolchildren, via a crowdfunding campaign on Pledge Music.  From affordable swag like a ballcap to the opportunity to have dinner with her or own her "Man I Feel Like A Woman" outfit, the Canadian singer-songwriter is offering perks with pre-orders of  NOW with proceeds going towards her Shania Kids Can Foundation.

Started in 2010, the charity is dedicated to to relieving "the economic, social and personal sufferings of children that she herself experienced as a child." In her memoirs, Twain outlined a childhood where she was poor, abused and would frequently go to school hungry.

What the foundation does is create "clubhouses" in participating schools where students can procure things like food and school supplies as well as have access to recreational equipment as well as things like psychological support, vocational training and skills development.

Better, though, are the special items. Twain is selling her "Man I Feel Like A Woman" outfit designed by Marc Bouwer and made by Glynda Conaway. That will cost $7,500 USD ($9,462 CAD) and comes with the dress, silk gloves, a top hat, the NOW album on CD and digital, and an autographed Still The One: Live From Vegas DVD. For $100,000 USD ($126,157 CAD) one can "Dine With Shania," which includes flights to Nashville, a night in a five-star hotel, a private tour of the Country Music Hall of Fame, dinner with Twain and a number of other perks.