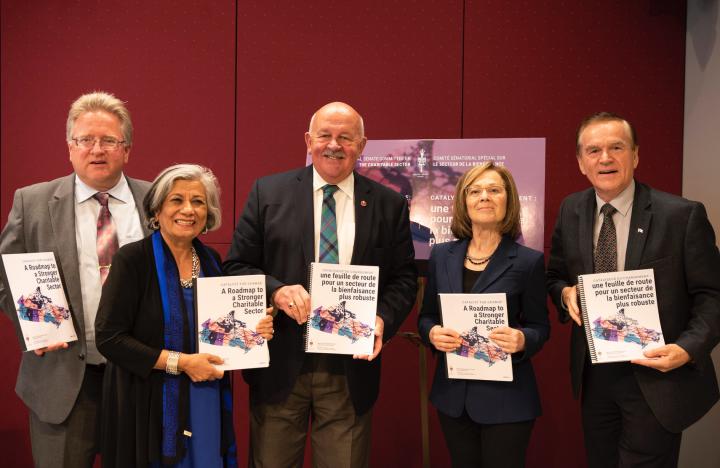 A special Senate committee on Canada's charitable sector has called on the federal government to bolster the country's non-profit sector, in part by adopting a national volunteer strategy.

Among 42 recommendations in the all-party Canadian Senate report, Catalyst for Change: A Roadmap to a Stronger Charitable Sector, the Special Senate Committee on the Charitable Sector urged that the legal and regulatory framework for charities and non-profits countrywide be modernized.

In addition, the 190-page report urged that the Canadian government "implement a national volunteer strategy to encourage volunteerism by all Canadians in their communities, recognizing that the needs of northern, rural and urban communities are unique."

The committee estimates around 86,000 registered charities and 85,000 non-profit organizations serve Canadians, with the sector employing over 2 million people and generating more than 7 percent of Canada’s gross domestic product.

The Senate committee, which studied the impact of federal and provincial laws on charities, volunteer groups, foundations and non-profit organizations heard from Canadians during 24 public hearings and as part of around 90 written submissions received.

"While the sector is resilient and innovative, its potential is limited by what are seen by many stakeholders as complex, outdated rules and a lack of coordinated support within the federal government," the Senate committee said in its report.

Their findings indicate Canada's charity sector underlining challenges in recruiting and retaining paid staff as "they struggle to compete with public- and private-sector employers in terms of pay, pension, benefits and training.”

As a remedy, the Senate committee called for "the creation of a national volunteer strategy to encourage volunteerism and a human resources renewal plan to ensure the long-term sustainability of the workforce.”

Imagine Canada in its own submission to the Senate committee argued most charities and nonprofits in Canada are small community-based organizations challenged to recruit and retain staff.

"If there is an issue that needs to be addressed, it is the need to provide more appropriate compensation to those working in the many small and/or community-based organizations," Imagine Canada, which offers programs and  resources to strengthen Canadian charities and their operations, told the committee.

Krishan Mehta, assistant vice president of engagement at  Ryerson University, when appearing before the Senate committee, told the politicians to tap the generosity of Canadian newcomers.

"...Charitable giving doesn’t begin in Canada. Immigrants come with varying experiences about charities and giving, and those experiences colour how they participate and support the important work of our sector. As a result, governments and NGO leaders here need to be aware of the historical context that influences these perceptions," Mehta argued.

The final Senate report said the legal and regulatory framework guiding Canadian charities is out of date as non-profits look to survive and thrive in a fast-changing Canada.

"As these organizations seek sustainable funding models, they are expanding to new areas of revenue generation, sometime pushing the limits permitted under existing legal and regulatory constraints. Finding new forms of operation and drawing on innovative and often young volunteers and staff, these social enterprises are breaking new ground and finding ways to do good while doing well financially," the report states.

"The committee recommends that current rules and guidance policies from Ottawa be revised to allow charities greater freedom to work with partner organizations, while ensuring that charitable dollars are spent on charitable purposes," the report states in its executive summary.

"To continue its good work, the sector needs meaningful law and policy reform, as well as a renewed relationship with the federal government. This report is a roadmap to ensure that genuine change is delivered so that the sector can reach from great to exceptional. The committee trusts that the federal government, together with the Advisory Committee on the Charitable Sector, will work swiftly to implement its recommendations,” the report added.

“The charitable, non-profit and voluntary sector is full of people who have dedicated themselves to the highest ideals of public service. They told us they can do still more, if we can give them the proper tools. It is time for the government to work with them to succeed so they can continue their crucial work," Senator Terry Mercer, chair of the committee, said in his own statement.