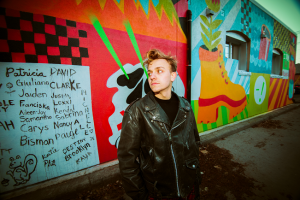 Toronto singer-songwriter Scott Helman collected almost 1,000 submissions for his “Evergreen Manuscript,” which features fans’ feelings about the global climate crisis, and he’ll send it to government and corporate leaders around the world on May 1.

Helman is encouraging fans in Canada and the United States to contact their local, provincial, state and federal elected officials to voice their concerns about the crisis and ask them what plans they have to support the climate change battle.

Fans are asked to visit this web page at 12 p.m. EST on “MayDay” to help send out the manuscript.

Fans are also encouraged to use the hashtag #EvergreenProject on social media and reveal how they’re raising awareness about climate change or taking action in their communities.

Helman is asking fans who are able to donate time and/or money to organizations taking action against climate change. Some of the organizations supporting the Evergreen Project include Sierra Club Foundation, Greenpeace Canada, Environmental Defence and WE Movement.

To coincide with the release of “Evergreen,” Helman and his team — including artist Kayla Buium (Milkbox) — hosted a five-hour mural paint-in in downtown Toronto that was live-streamed around the world. The goal of the mural was to animate the intimate testimonies submitted to the Evergreen Manuscript.

Helman also created Solve The Solvable, a forum where people can get involved with issues and talk about positive things they’re doing, in 2015.