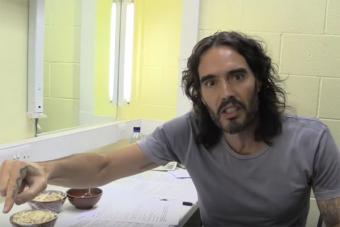 Russell Brand is calling for a greater understanding between people in the aftermath of Donald Trump winning the U.S. election and the United Kingdom's Brexit vote to withdraw from the European Union.

In episode 372 of the British actor/comedian/philosopher's "The Trews" video blog, Brand explained that the rise of Trump is a symptom of modern politics. Trump is popular because many of the people in America are unhappy with their current circumstances.

"We have to create a world where Donald Trump isn't necessary and if we don't create that kind of world don't be surprised when Donald Trump becomes president," said Brand in the video.

"We have to change the way we treat each other, change the way we see ourselves, change the way we talk about the world. Significant change. Because the people that vote for Brexit, the people that vote for Donald Trump — even if people do think that immigration is the issue and loads of us that don't think that immigration is the issue — we have a duty to communicate in a way that is understandable, accessible, not condescending and not patronizing why we believe this is the wrong path for the world. And we're talking about people who don't have an awful lot to lose."

Brand then went on to ask that people who might be feeling disillusioned by politics right now try to be positive.

"If you're feeling afraid or angry or disappointed about it, try not to," he said. "Try to be optimistic about it because this had to happen. In the end we had to reach some sort of climax, some sort of crisis, some sort of nadir where it's no longer possible to continue in the way that we have been.

"What I think the election of Donald Trump means is it's no longer possible to pretend that politics is alright. Because look at it."

As an example of how the current western political systems aren't serving average people, Brand brought up outgoing U.S. president Barack Obama, comparing him to Jesus Christ for all the good he has done during his two terms in office. Yet even he wasn't perfect.

"Let's look at the last eight years and the kind of things that were happening and that's why people were disillusioned," said Brand. "Because if you see someone like Barack Obama in the White House, who seems amiable and capable, there's still terrible unrest, still drone killings, still terrible poverty, still no consequences for people who exploited huge numbers of ordinary Americans through the financial crash.