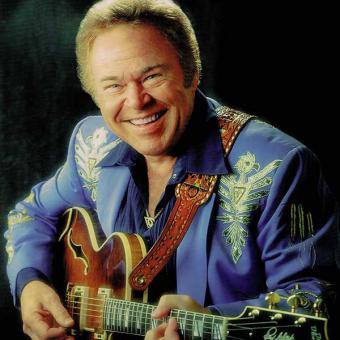 Clark, who was most well-known for hosting the long-running Hee Haw variety television program between 1969-97, passed away on Nov. 15 at his home in Tusla, OK due to complications from pneumonia. He was 85. In a memorial notice for Clark his family has requested that supporters donate to St. Jude in lieu of flowers.

St. Jude Children's Hospital is a leader in combating catastrophic pediatric diseases, including childhood cancers. The hospital's official policy is that no child is denied treatment based on race, religion or a family's ability to pay. The hospital was founded in 1962 by actor/singer/producer Danny Thomas, who achieved fame in the early 1950s with The Danny Thomas Show. Thomas vowed that once he had "made it" he'd dedicate a shrine to St. Jude Thaddeus, the patron saint of hopeless causes. The hospital is it and since opening its doors St. June says the overall childhood cancer survival rate of its patients has increased from 20 to 80 per cent owing to its ability to provide improved care and advances in medical technology.

"I see a lot of celebrities come to St. Jude, and you know what’s in a person’s heart by how they entertain the children," said hospital CEO David McKee, in a statement. "He was truly touched by the kids, not the cameras."

Clark leant his name to numerous local charities and causes over the years, whether they were in Tennessee, where Hee Haw was filmed, or in his hometown of Tulsa. His annual celebrity golf tournaments would raise thousands for children's hospitals.

"I’ve just been so blessed in my life," Clark has said about his charity work. "It would be a sin for me to sit there and not share it, and not do something to help others."

Considered one of the finest banjo and guitar players of his generation, Clark has been inducted into the Country Music Hall of Fame and made a member of the Grand Ole Opry. He was also one of the first western musicians to ever perform in the former Soviet Union and had a recurring role on The Beverley Hillbillies. Upon his death numerous entertainers made testimonials about him, including the likes of Dolly Parton, Donny Osmond, Keith Urban and the pop group Hanson.

Said Parton: "Roy Clark was one of the greatest ever. His spirit will never die. I loved him dearly and he will be missed."