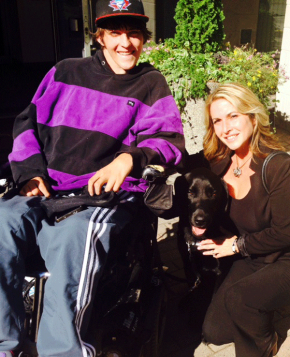 Retired roller girl Tanya Anthony didn’t walk by the young man in the wheelchair asking for money outside Toronto’s Maple Leaf Gardens to help his service dog; she stopped to talk to him and ask him why. Nineteen-year-old Nic Paterson became quadriplegic over two years ago in a snowboard accident. His government disability cheque barely covers his living expenses and he didn’t have the money to take his dog Shadow to the vet for a broken toe. But that’s not all she discovered.

This teenager almost died from his accident at Horseshoe Valley ski resort in Barrie, Ont. that Feb. 12, 2012, and doctors at St. Michael’s Hospital told him he would only be able to move his fingers — and would never walk again. Determined, through physiotherapy twice a week, he proved them wrong by not just moving his fingers, but his arms, his toes and kicking out his legs a little bit.

“What I can’t stress enough is just don’t give up,” Paterson says in the 30-minute documentary, Year One: The Nic Paterson Story, filmed and produced by Kevin Millington who also shot a short visit of Anthony with Paterson.

The problem? Government-run Ontario Health Insurance Plan (OHIP) will no longer pay for his treatment, so he can’t progress. His mother is self-employed with no medical benefits and his father passed away from lung cancer before Nic’s accident. He has an older brother, Mitch.

Now Anthony is on a mission to help him get the physiotherapy he needs so that he might one day walk again. On Oct. 6, as part of a crowdfunding campaign commitment to raise $15,000 so he can continue physio for another year, she will rollerblade 50 kilometers along the lakeshore bike path and back. She was once a member of a New York roller dance team for 15 years and Ready to Roll in Canada. Her nickname was Blades.

“I did shows in nightclubs as well and for hundreds of charities,” she tells Samaritanmag. A year and a half ago, she shattered her elbow blading and had not put skates on since she started prepping for this marathon skate.  “It seemed a little bit crazy for me to ask people for donations and yet I’m not doing anything for them to donate towards, so my father came up with the idea,” Anthony says.

The $15,000 will enable Paterson to continue physiotherapy two to three times a week for a year at Toronto Rehabilitation Institute’s Lyndhurst Spinal Cord Rehab Centre. And surpassing that goal just means more much-needed physio. The money will go directly to the clinic, it says on the donation web site.

What drew Anthony to this perfect stranger and help him in any way she could?

“Steve and I were at Buskerfest at Maple Leaf Gardens and he was sitting outside with a sign asking for help for his service dog because the ramp from the wheelchair accessible van landed on his toe and he broke it,” recounts Anthony, who is married to television host Steve Anthony of CP24’s Breakfast, also a former MuchMusic VJ and radio DJ.

“Nic only gets $1100 a month in disability from the government so he didn’t have enough money to take him to the vet. The vet wouldn’t look at his dog without him paying upfront so I just felt the urge to pay for his vet bill. I sat and chatted with him for probably half an hour.

“I got his phone number because I wanted to make sure that the money was going to the vet because I didn’t know him at the time. I got in touch with him. I got in touch with his mom and met her in person. And then I found out everything about his physiotherapy, the fact that he was discharged. They have no more money. His mother used all of her retirement money.

“It’s been a hard two years for them. The money that he gets every month is just enough for him to live.”

From all Anthony has seen, including during a recent visit that was filmed for a video to post on the YouCaring fundraising page, with continued treatment and hard work Paterson has the potential to walk again.  The documentary and video show how far he has come, but without continued and sufficient physiotherapy his dream will die.

STORY CONTINUES AFTER THE SHORT DOC:

“Lyndhurst Spinal Cord Rehab Centre gave him a year after his accident, but then his mother begged them and they extended it a year for them, so that just came to an end a month ago,” Anthony says.

Regardless of a patient’s progress, she says that’s how OHIP works.  “I’m learning a lot. If they’re not walking in a year, they stop [paying for] physiotherapy.”

Anthony, who in the two short months she has known Paterson, picked up Shadow from the vet and paid the bill directly, has helped the teen clean up at home, made him food, and, of course, started this fundraising campaign, said she hadn’t asked him to do any movements for her until they shot the video.

“He lifted his leg out of my hand. He can kick his legs out. I’ve never been to a physiotherapy appointment with him. I’ve just seen the video but to actually see it — to see him able to do what he’s able to do when they told him he wouldn’t be able to — is incredible and I do think he can walk. He just had some setbacks,” she says.

“And he told me the other day that he never feels depressed,” she adds. “It was eye-opening because there are days when I feel down and then I think about people like Nic.”