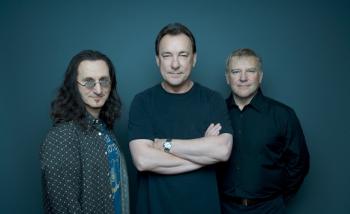 The members of legendary Canadian rock trio Rush have been raising funds or awareness for various causes since their very first shows at Toronto’s Maple Leaf Gardens more than 40 years ago, and this year their philanthropy will be recognized by the Juno Awards.

Geddy Lee, Alex Lifeson and Neil Peart will receive the 2015 Allan Waters Humanitarian Award the night before the televised ceremony at the March 14 gala awards dinner in Hamilton, Ontario. Named after CHUM Ltd. founder Allan Waters, the award, which was inaugurated in 20006, recognizes Canadian musicians “whose contributions have positively enhanced the social fabric of Canada.” Previous winners include Raine Maida and Chantal Kreviazuk, Bruce Cockburn, Bryan Adams, and Sarah McLachlan.

In a press release put out by the Canadian Academy of Recording Arts and Sciences (CARAS), president/CEO Allan Reid said, "The group’s dedication to countless charities and organizations over the course of their career is truly remarkable. Their tenacity and spirit serves as an inspiration to all of us, and we salute them for all of their exceptional work."

The band, as a whole, released this statement: “We are sincerely grateful to be recognized as this year’s recipients of the Allan Waters Humanitarian Award. We are proud, honoured and humbled to be in the company of all Canadians who find it within their hearts to help those in need.”

The good works of Rush are many. As noted in a press release, the band behind such classic tracks as “Subdivisions,” “Fly By Night” and “Tom Sawyer” have been long-time supporters of the Toronto Food Bank, encouraging fans to bring food to their concerts for those in need. Rush have also played charity shows for the United Way and, in the early ‘90s, for amFAR to raise funds for AIDS research.

They have also donated substantial concert ticket proceeds to the Winnipeg’s Canadian Museum for Human Rights and actor Brad Pitt’s Make It Right Foundation which assisted in the revitalization of New Orleans after Hurricane Katrina devastated the city in 2005. In the last five years, the band has also raised nearly $2 million for various charities, including Doctors Without Borders, by donating a dollar from sales of every concert ticket. And some $575,000 was raised for Alberta Flood Relief in 2013 thanks to a benefit concert Rush played at Red Deer’s Enmax Centrium.

The band has also done their part to encourage music education in disadvantaged schools by supporting the American non-profit Little Kids Rock. Working with endorsement partners, drummer Peart has generated funds for Child Advocates while guitarist Lifeson has donated royalties for one of his signature guitars to the Domenic Troiano Foundation which endows guitar music scholarships to future rockers.

Individually, the members of Rush have spent time and money on causes close to their hearts. Kansas City’s Negro Leagues Baseball Museum was the beneficiary of some 400 baseballs signed by former Negro League players and donated by baseball fan Lee. The Chilean Red Cross received $10,000 thanks to Peart after the drummer matched funds donated by fans who had read a story had written he about his experiences touring South America in 2010. Alex Lifeson has also donated his paintings to raise funds for The Kidney Foundation; he also supports Casey House.

Lifeson and Lee also co-host a biannual wine event (cheekily titled “Grapes Under Presure”) supporting Ontario’s wine growing regions, while Lee is a long-time board member of Grapes for Humanity Canada which raises funds for various humanitarian causes worldwide on behalf of the international wine community.