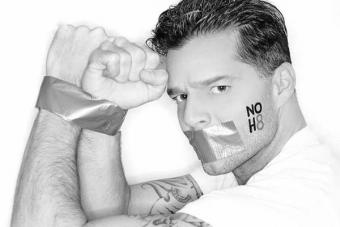 High-profile entertainer Ricky Martin is taking a stand for gun control in the wake of the Orlando  Pulse mass shooting.

Martin, whose hit songs include "Livin' la Vida Loca" and "She Bangs," made his pro-gun control feelings known in an op-ed piece written for Univision.

On June 12, lone gunman Omar Mateen shot and killed 49 people and injured 53 at a gay club Pulse in Orlando, Florida. It was the deadliest mass shooting in U.S. history.

In his essay Martin asks a number of pointed questions like, "So why were these 102 people shot? Because of who they love? Because they were celebrating their equality and civil rights?" and "How many more lives need to be lost before we do something about lax gun laws?" He then encourages readers to pressure their respective congressmen to get tough on gun control.

Yesterday the U.S. Senate voted against putting laws in place that would curb gun sales to people on terrorism watch lists and expand background checks on gun buyers.

Read the full essay below:

"Although I am out of the country my heart is in Orlando. I still cannot believe that an individual filled with so much hate killed 49 people and injured 53 on June 12. People that unlike him were celebrating love, freedom and life. I try to find calmness within, so that I can properly express my current state of mind in this article and share with you how I feel during this important mourning process. The tragedy that occurred in Orlando hurts me in so many ways. It hurts me as a man, as a human being, and as a gay person, because so many of the victims were brothers and sisters of the LGBT community. I am in pain, I am sad, I am angry.

"As I read the newspapers and watch the newscasts, the media is describing this act as a hate crime and an act of domestic terrorism. Many sources say this individual visited the club frequently in the last year. Some deduce that this was an act of “internalized homophobia,” which is when a lesbian, gay, bisexual or transsexual feels hatred for their own community.

"Nonetheless, the purpose of this senseless act seems clear: to strike terror in the LGBT community and to our society which value basic freedoms and civil rights for all; and to spew hatred in the largest mass shooting in U.S. history. It has also proven that gun laws MUST change in this country. However, my faith in humanity is greater than all of this. I do believe that love conquers all, but I also believe we need to join together and end this hatred.

"So why were these 102 people shot? Because of who they love? Because they were celebrating their equality and civil rights? What were these people doing that was so awful that a man would drive to Orlando, Florida with an AR-15-style assault rifle and a handgun invigorated with the desire to kill as many from this community as his bullets and time would allow him? As I watch the news and see the mothers, fathers, family members and friends grieving this senseless act, my heart aches. I cannot fight the tears as I read the pleas sent by the victims through texts to their loved ones minutes before their executions. Waves of fear have been spread throughout the LGBT community and our society as a whole. The LGBT community is the latest target of such violence that has included, among others, journalists, office workers and travelers. Yet, I ask that we stand strong and not give in to fear. We must be unified and bonded by these horrific, cowardly acts designed to silence and suppress us. We cannot allow for hate to win, and we cannot stay quiet and hide.

"It seems recent headlines are increasingly filled with hatred and intolerance. We have grown as a society by moving towards greater inclusiveness, empathy, and acceptance, and we must continue down that path and always reject divisiveness and animosity. The United States is strongest rooted firmly in a foundation constructed on beliefs of freedom; whose laws are built to leave behind regimes that suffocate individuality; a country that welcomes differences and realizes its greatness resides in its people. These are ideals we strive for in the never-ending pursuit to build a better world. We often struggle in this pursuit, but we should never be deterred from the ongoing mission. This inexplicable tragedy in Orlando is a perfect example of why it is wrong for people with power to use hate and fear to headline their religious and political rhetoric. We as a society must never turn our heads or find it acceptable for hate, racism, and bigotry to become a part of our every day conversations. This was a man that allowed hatred to consume him to the point that he killed 49 men and women that were doing nothing else but proudly living a dignified life.  It’s time to change the conversation. We need to speak a language of love and openly reject hate no matter where it comes from.

"Today, too many people continue to defend the indefensible. There are a series of issues in play here, but the United States of America has an undeniable problem with gun violence. How many more lives need to be lost before we do something about lax gun laws? How can a person previously tied to terrorism and interviewed by the FBI on several occasions be permitted to work as a security guard and still have the ability to legally purchase guns? How can we continue to stand by an amendment ratified in 1791 to justify an incomprehensible proliferation of firearms in the U.S? You know what else was permitted in 1791? Slavery, dueling as a way of settling arguments, consensual sex with children above 10 in most states (Delaware was 7), wife beating as a valid exercise of a husband's authority over his wife, and the list of absurdities goes on and on. Today, we know better as a society. We are more civilized. As President Obama stated, “To actively do nothing is a decision as well.” People continue to say it is their right to bear arms. What about our right to feel safe?

"I ask you to BREAK YOUR SILENCE and call each and every one of your congressman - those you elected into power to represent you and your ideals - 10 times each day until they act. Set a timer if it helps, but make the calls. And most importantly LOVE. Love with all your heart. Love those close to you, and those you don’t even know. Be kind, be empathetic, be compassionate, be generous. Fill your life and words with nothing but love. I have faith in humanity. I refuse to accept that this is the world my children will inherit. I will never cease to fight for love."