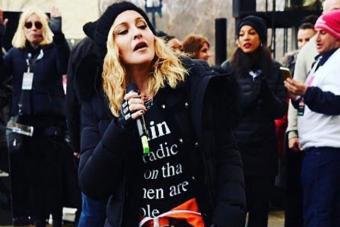 Pop musician Madonna made a passionate speech at the Women's March On Washington on Jan. 21 to about half-a-million attendees and even more watching on TV.

"Are you still awake out there? Are you sure about that? Can you hear me?Are you ready to shake up up the world?" the outspoken singer began.

Noting that we had "fallen into a false sense of comfort," certain that good would win out in the end, she went to say: "The revolution starts here. The fight for the right to be free, to be who we are, to be equal."

Laced with a couple of strong F-words — which prompted CNN to cutaway from her closing remarks — she also stirred up controversey when she mentioned she had fantacized about blowing up the White House.

The massive Women's March and its many satellite events in places like Los Angeles (750,000 estimated attendance), New York (250,000), Chicago (150-250,000), Boston (135-150,000) and Seattle (130,000) were meant to be a firm show of force directed at newly empowered U.S. President Donald Trump who has been aggressively signaling he'll be attempting to strip women of their rights since he officially took power.

"The Women’s March on Washington will send a bold message to our new administration on their first day in office, and to the world, that women’s rights are human rights," said a description on the official Women's March Facebook page. "We stand together, recognizing that defending the most marginalized among us is defending all of us."

In addition to performing the songs "Express Yourself" and "Human Nature" at the march, Madonna also made a point to encourage those in attendance to refuse to "accept this new age of tyranny" and to reinforce that "we will not back down" before peppering the speech with multiple "fuck yous" directed at detractors of the march.

Hello. Are you still awake out there? Are you sure about that? Can you hear me?Are you ready to shake up up the world? Welcome to the revolution of love. To the rebellion. To our refusal as women to accept this new age of tyranny. Where not just women are in danger, but all marginalized people. Where people uniquely different might be considered a crime. It took us this horrific moment of darkness to wake us the fuck up.

It seems as though we had all slipped into a false sense of comfort. That justice would prevail and that good would win in the end. Well, good did not win this election, but good will win in the end. So what today means is that we are far from the end. Today marks the beginning, the beginning of our story. The revolution starts here. The fight for the right to be free, to be who we are, to be equal. Let's march together through this darkness and with each step. Know that we are not afraid. That we are not alone, that we will not back down. That there is power in our unity and that no opposing force stands a chance in the face of true solidarity.

And to our detractors that insist that this march will never add up to anything, fuck you. Fuck you. It is the beginning of much needed change. Change that will require sacrifice, people. Change that will require many of us to make different choices in our lives, but this is the hallmark of revolution. So my question to you today, is are you ready? I said, are you ready? Say yes, we are ready. Say, yes we are ready. One more time: you're ready.
"Yes, I'm angry. Yes, I am outraged. Yes, I have thought an awful lot of blowing up the White House, but I know that this won't change anything. We cannot fall into despair. As the poet, W.H. Auden once wrote on the eve of World War II: We must love one another or die. I choose love. Are you with me? Say this with me: We choose love. We choose love. We choose love.

Watch the Madonna speech (starts around 14:00):

Posted by Women's March on Washington on Saturday, January 21, 2017