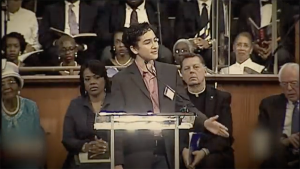 He's spoken in front of such luminaries as the Martin Luther King Family and U.S. Senator Bernie Sanders and his viral videos of his controversial slam poetry have garnered more than 15 million views. His name is Royce Mann; he's from Atlanta; he's a slam poet — and he's only 15.

Mann, who is also an actor who has starred in movies, commercials and theatrical productions — working with Gina Gershon,  Jasmine Guy, Stephen King, John Mellencamp and T-Bone Burnett — offered a poignant poem recently at the Ebenezer Baptist Church in honour of Martin Luther King Day, appearing before the King Family and Senator Sanders.

His eloquent poem, entitled "Rise Up," has gone viral. In it he asks us to “rise up with those overlooked and undervalued by society” and goes on to stirring lines about the black man, the boy who was a girl, the Muslim woman, the boy in the wheelchair, the poor white boy and more.

This isn't the first time Mann's oratory has gone viral: last year, his slam poem "White Boy Privilege" won him first place at his school poetry contest and has been viewed.

His slam poetry is viewed as controversial as he talks about the issue of “white boy privilege,” one that he enjoys, where he doesn’t have the tag “criminal” looming over his head or has to worry about anything, unlike others who are judged by the colour of their skin. He explains it in “White Boy Privilege” and alludes to it in “Rise Up.” He views others as unfairly oppressed.

Here is the full text of his appearance at the Ebenezer Church on Jan. 16, Martin Luther King Jr. Day:

Hello, First of all, I'd like to thank the King Family, the King Centre and the Ebenezer Baptist Church for welcoming me to this wonderful celebration, remembrance and action. I have had the privilege of growing up in the beautiful District Five that is the epicenter of civil rights history and was the epicenter of the civil rights movement.

I've grown up with the honourable John Lewis as my representative, a man who marched alongside Dr. King; a man who was the youngest speaker at the March on Washington and I've had the privilege to learn so much about the life and legacy of Dr. King.  I've heard stories from my Mom about how my late grandfather got to meet Dr. King on multiple occasions. I've had the privilege of talking to a man who drove Dr. King and was a friend of the King Family, and I heard stories from him about Dr. King.

And we are here today not only to celebrate Dr. King, a wonderful man, father, husband and son and a wonderful leader of the civil rights movement, but we're also here because there's more to be done. The movement for equality is not over. and we must remember to fight for equality every day, each and every one of us, as Dr. King did. And with that in mind, I will be reciting a poem that I wrote called "Rise Up."

Let's rise up with those overlooked and undervalued by society.

The black man who walks down the street on the way to his job - it's his first day as an eighth grade English teacher.

The same black man who has his son, his most prized possession, who told that son, 'Life will be hard, but anything is possible.'

The black man who walks down the street on the way to his job, only to pass the woman clutching her purse a little too tightly.

Let's rise up with the boy who was a girl and then didn't know what he was and is now a boy. The boy with the parents loved their daughter but disowned their son.

Let's rise up with the Muslim woman who works for the Justice Department only to experience injustice every time she wears a hijab.

Let's rise up and lend a hand to the boy who can't - the boy who is in a wheelchair watching the other kids play basketball - the boy who becomes the only one in his class to win an Olympic gold medal.

Let's rise up with the woman who was born in the U.S., whose parents are Dominican and whose son is all-American, so why is she repeatedly told to go back to Mexico?

Let's even rise up with the poor white boy - the one who is told he is privileged but doesn't feel that way, and yes, this boy does exist. The boy who talks about the pool his family doesn't have and wears the shoes his mother can't afford. He was given everything, right? So it must be his fault, right? Wrong! Because as one YouTube commenter said, 'Life can be hard if you're white, but life will never be hard because you're white.'

Let's rise up with the young Native American poet. She speaks wisdom but no one listens. The poet who should be on stage right now, but instead has to hear a white boy speak for her. Let's rise up.

Because once we do, that glass ceiling will be in reach and trust me, it is breakable.

Once we do, we will be able to see over any wall, no matter who pays for it.

Once we do, the sky will truly be the limit. Scratch that - there will be no limit!

Now is the time to rise - to rise up together as one.