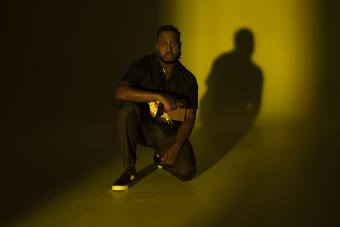 According to a 2020 Wharton School study, disparaging remarks about women in song lyrics have decreased overall in the last 50 years, but have increased in hip-hop and R&B in that same period.

As filmmaker Ava DuVernay tweeted out in 2015, “To be a woman who loves hip-hop at times is to be in love with your abuser.”

On March 30, Omär put out an open letter via Billboard that explains how R&B and hip-hop can play a more prominent role in protecting Black women.

While Omär’s genre may be experiencing commercial success, he still has his reservations about the portrayal of women in R&B music. “Our most popular songs denigrate women, telling them they don’t matter,” Omär says.

Omär says he is tired of seeing women in lyrics portrayed as “a commodity to be shared sexually with friends or sometimes even promoting physical violence against women.”

R&B and hip-hop, Omär says, are “now responsible for the majority of all streaming music consumption.” As a result, R&B and hip-hop are undeniable cultural influences that help shape and frame public discourse.

“We can do many things to help protect Black women and our communities just in what we say,” Omär says. He believes that artists like himself have “a unique opportunity to change the way Black women are portrayed and spoken about with our lyrics.”

“We have to make a change,” Omär says.

Omär believes that the influential nature of music makes it the perfect art form to create such change. Artists such as Drake exemplify the power that music has over culture. After releasing the 2015 hit “Know Yourself,” Drake branded Toronto as “The 6”.

“What artists say matters and impacts culture. If this is true about nicknaming an entire city wouldn’t it mean years of objectifying and shaming women has had an impact on our communities?”

“I know this letter won’t change everything, but I hope it can add to the important conversation that’s already happening,” Omär says. He hopes to foster a new culture in R&B and hip-hop circles that values and protects Black women.

The average listener can also influence these changes more quickly through their streaming habits, such as promoting songs and artists that empower women. Omär knows that “the industry wants what sells,” it’s just a matter of making these empowering messages more in demand.

Read the full letter below:

The last year has brought many of us to a breaking point. We’ve gone into the streets to tell anyone who will listen that the lives of Black people matter in this country and in our world. Yet at the same time our most popular songs denigrate women, telling them they don’t matter. Those things do not reconcile.

R&B and hip/hop, where I typically participate as an artist, is now responsible for the majority of all streaming music consumption. However, much of it is littered with misogynistic lyrics that blatantly devalue women to make heroes of men, portraying women as a commodity to be shared sexually with friends or sometimes even promoting physical violence against women. We have to make a change.

Before anyone tries to make me out to be playing the hero, Black women have been speaking out about this. But no one has been listening.

Essence magazine launched a campaign called Take Back the Music lead by Michaela Angela Davis and which offered non-combative and non-cancel culture solutions. Davis commented, “We want to make clear what our initiative is not … It is not a boycott of any particular artists or venue for artistic expression. We all have one thing in common: We’re deeply concerned by the pervasiveness of negative images of Black women and its effect on our girls.” She first said this in 2005. And in 2015, filmmaker Ava DuVernay shared on Twitter, “To be a woman who loves hip-hop at times is to be in love with your abuser. Because the music was and is that. And yet the culture is ours.”

Nothing has changed since Davis or DuVernay spoke out. Since the 1970s the outright denigration of women in all other music genres has decreased, but it has remained the same for R&B and increased in rap according to a 2020 Wharton working study. The incriminating lyrics examined in the study range from explicit violence against women to more dangerous implicit misogyny with lyrics less likely to associate women with competence and intelligence.

Because men — particularly Black men — dominate R&B/hip-hop, we have a unique opportunity to change the way Black women are portrayed and spoken about with our lyrics. In fact, we have a responsibility to be co-conspirators in the fight to protect Black women in every manner and challenge the lyrics that have displayed women as less than men because it puts them in danger.

According to the most recent CDC study:

• 1 in 5 Black women in the United States has experienced rape.
• 40% will experience intimate partner violence in their lifetime.
• And Black women are killed at a higher rate than any other group of women.

If Black women matter, they have to really matter. Not simply in theory or social media posts, but as a life practice. We can no longer claim to value and protect Black women while producing music that inspires the world to believe they are unimportant at best and deserving of violence at worst.

It’s not just a song. What we say into those microphones about women in our music impacts the lives of women who hear it and the men who are influenced by it. The same men who claim high respect for their mothers, sisters and friends somehow have little to no respect for mine by advancing these lyrics whether the man is a corporate worker in the music industry or an artist. If that mindset is reciprocated in our culture, then no woman is protected. We cannot afford to only have high respect for women who are related to us or that we know. We must extend that respect to women everywhere, including in our music because it has such a big impact on our communities.

For example, in Drake’s 2015 hit “Know Yourself,” he officially declared Toronto “The 6”: “I was runnin’ through the 6 with my woes!” And just like that, the Canadian city became commonly known as “The 6” and I, like many others, couldn’t wait to go. Forget the fact that the songwriter is from Zone 6 in Atlanta. Drake said that Toronto is now “The 6” and we all agreed. That was that.

We’ve seen this kind of power in music many times. What artists say matters and impacts culture. If this is true about nicknaming an entire city, wouldn’t it mean years of objectifying and shaming women has had an impact on our communities too?

I am not naive. I know this letter won’t change everything, but I hope it can add to the important conversation that’s already happening. I hope it will force me and my peers to think twice about the music we create. The lyrics we sing and rap, the images we display, have a much larger impact on the lives of women than we think.

The industry wants what sells, and in today’s society domination of women is the demand of R&B/hip-hop listeners as dictated by our streaming habits. So the way to introduce change is through all of us.

This may be the most difficult change of all, but enough is enough.