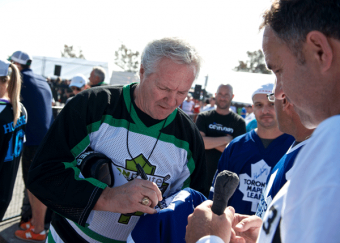 Shooting and scoring to help beat cancer just got a lot easier with news that Via Rail will provide free rail travel to out-of-town teams coming into Toronto to play in the fifth annual Road Hockey to Conquer Cancer event this Sept. 26. That gives you plenty of time to brush up on your skills and assemble your team.

So if you live anywhere along the Montreal to Windsor corridor, you will get free rail travel to and from the event that in the past four years has raised over $9 million for personalized cancer medicine at the Princess Margaret Cancer Centre, according to the Foundation.

“We have all been touched in some way by cancer, so for us to give players a more human way to travel to Toronto for The Road Hockey to Conquer Cancer is our way to contribute to conquering cancer in our lifetime,” said Pierre Santoni, senior director, domestic and international sales at Via Rail Canada, in a press statement.

The Princess Margaret Cancer Foundation started Road Hockey to Conquer Cancer in 2011. The event, which runs from dawn to dusk, will see teams (who have raised at least $10,000 each) play five games.

Shawn Burt, who has been given the fun title of Chief Hockey Officer at The Princess Margaret Cancer Foundation, said: “This is an incredible opportunity for Road Hockey to Conquer Cancer and will light a fire under our Global Challenge program. What an opportunity for our out-of-town teams to register and make a party out of playing in the event. VIA Rail Canada will really contribute to the expansion of Road Hockey to Conquer Cancer. We must never forget that funds raised by the event support critical cancer research at The Princess Margaret.”