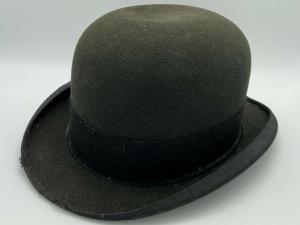 A bowler hat worn and signed by Radiohead lead singer and multi-instrumentalist Thom Yorke has been put up for auction on eBay to benefit a testicular cancer charity.

All of the proceeds from the sale of the hat will go to Cahonas Scotland, a charity that creates awareness of testicular cancer and educates men about its signs and symptoms since early detection means more effective treatment of the disease.

Testicular cancer primarily affects men between the ages of 15 and 45 and, if caught early, it’s one of the most curable forms of cancer. That’s why Cahonas recommends monthly self-checks.

Yorke’s bowler hat, which comes with a certificate from Cahonas, has attracted a lot of interest due to Radiohead’s popularity and influence. The British band has sold more than 30 million albums worldwide and was inducted into the Rock and Roll Hall of Fame in 2019.

Yorke wore the hat in the music video for Radiohead’s “Lotus Flower.”

Artist, photographer and art lecturer Rachel Owen, Yorke’s partner of 23 years who had two children with him before they separated in 2015, passed away at age 48 in 2016 after suffering from cancer.