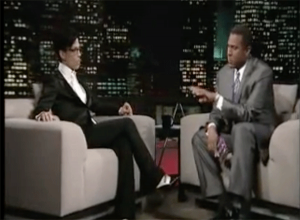 In a 2009 television interview with talk show host Tavis Smiley, late musician Prince opened up about being born with epilepsy, having a harsh father and getting teased at school. Noting that young people could benefit from his answer, Smiley asked him how he got past the teasing and navigated his way into confidence and excellence, as well as how he was able to live a life of love, despite not always receiving it from his dad.

Prince, born Prince Roger Nelson, died April 21 at his Paisley Park home in Minnesota.  He was 57. The results of an autopsy are expected in four weeks.

On the rare occassion Prince agreed to an interview, he requested that print journalists talk to him without the benefit of a recorder or taking hand-written notes. Televised interviews were even more rare but Smiley was a long-time friend.

“I’ve never spoken about this before, but I was born epileptic,” Prince told Smiley in this 2009 chat. “And I used to have seizures when I was young and my mother and father didn’t know what to do or how to handle it, but they did the best they could with what little they had.

“My mother told me once day I walked into her and said ‘Mom, I’m not gonna be sick anymore.’ She said, ‘Why?’ I said, ‘because an angel told me so.’  Now, I don’t remember saying it; that’s just what she told me and from that point on, I’ve been having to deal with a lot of things — getting teased a lot in school, and early in my career I tried to compensate for that by being as flashy as I could and as noisy as I could.

“And I just looked forward to this time in my life when I could reflect back on it and talk to people like yourself, Dr. Cornel West — when you all come over to the house and we sit and we just talk about heavy things, I just become thankful. I don’t know what else to say on that.”

“You have so many fans of all ages and there are young people watching who I know will be helped by your answer to this question,” said Smiley, “As a kid, being teased, how did you grow out of that into, not just confidence but indeed into excellence? Maybe I put it in the wrong order — excellence and confidence — but how did you grow out of that? How did you navigate yourself past that?”

“Good question,” said Prince. “The first thing I did is, of course, I went into self and I taught myself music. My father left the piano at the house when he left and I wasn’t allowed to play it when he was there because I wasn’t as good as him, so when he left I was determined to get as good as him. And I taught myself to play music and I just stuck with it and I did it all the time. And sooner or later, people in the neighbourhood heard about me, and then they started to talk about me and it wasn’t in a teasing fashion; it was more, ‘Wow, look what he can do.’ 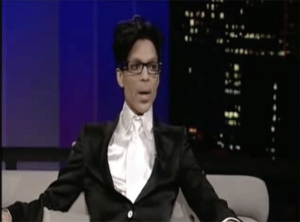 “And there’s something about having people around you giving you support that is motivating, and once I got that support from people then I believed I could do anything.

“And I had a lot of really good teachers,’ he added. My best friend André Cymone, his brother Eddie  — and I’m entirely indebted to in this regard — used to tell me, ‘Man, your songs are better than anybody’s on the radio. You can do whatever you want to do.’ And I just kept rolling with it, kept rolling with it. Eventually I went out to New York and I got turned down my first time but I felt like Jack Johnson too. I just wasn’t going to be put down.”

Johnson was the first African-American world heavyweight boxing champion. Ken Burns directed a 2005 film for PBS called Unforgivable Blackness: The Rise and Fall of Jack Johnson, which Prince told Smiley earlier in the interview that he had watched and related to.

“Talk to me about excellence,” Smiley said to Prince.” It’s clear that you are head and shoulders above pretty much everybody else in the world of music … Talk to me about how we, who are not Prince, can aspire to the level of excellence that you portray, in what we do everyday.”

“Well everybody’s talented at something,” Prince answers. “And that’s what makes the world go round and we all need each other.

“Again, it’s about good mentoring and because I had a lot of good people around — the other thing I have to point out though is that — how can I put this? — my father was so hard on me. I was never good enough and there was something about that. It was almost like the army when it came to music. ‘That’s not even close,’ he’d say. ‘That’s not even close to what I’m doing’ and he’d play again and I could here it.

“John Blackwell, my drummer, he’s the same way. His father taught him the same way. We learned like that. We learned from being shown; it doesn’t come from books and just reading. We need to be shown. So it’s just having really good teachers and a bar that’s high. Tiger Woods. I mean, I could go on and on.”

“You talked a couple of times about your father, which you don’t do in public,” noted Smiley. “Appreciate you opening up in that way – everything about you is love…your whole life is about love of humanity. How did you get to this place of being love when you have this relationship with your father that obviously didn’t always exhibit love? You could be a very mean person right now. Why not?”

“Well I have a mean side. I can go there. I’m very competitive,” said Prince. “I think from him being hard on me, the one thing I got out of it is I understood that in his harshness he wanted me to excel.

“He used to say things like, ‘Don’t ever get a girl pregnant; don’t ever get married; don’t this; don’t that.’ When he’d say these things, I didn’t know what to take from it so I’d create my own universe. My sister’s like that. A lot of my friends are like that — the ones that I still have, early musicians and things like that. Creating your own universe is the key to it, I believe. And letting all the people that you need occupy that universe.”

Watch the interview below: